Just before leaving the Languedoc for hibernation in the UK I was invited by Jeff Coutelou to taste through this year’s wines. Most are now finishing both fermentations and starting to settle for the winter in cuve. They will change and develop over the next few months of course, they are living wines and still in their infancy. Consequently, these observations are preliminary but, after five years of similar tastings, I feel more confident about predicting which way the wines will go.

2018 has undoubtedly been a troubled year for Jeff and fellow Languedoc producers, in particular those who follow organic and biodynamic principles. The damage began with the long period of rain in Spring and the mildew outbreak which ensued. Mildew damaged the flowers, buds and young grapes. It damaged the leaves making it more difficult for the vines to produce the energy to feed those grapes. Jeff cannot recall a year of such blight. This was followed by a very hot, very dry summer making the vines suffer still further, compounding their difficulty in producing good sized fruit. Yields are down some 50-60% following on from 2017 when they were down 20%. 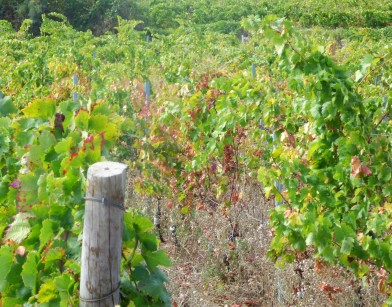 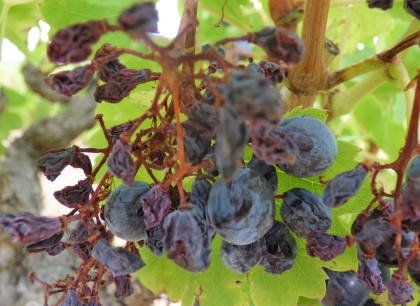 With all those problems could good wines be made?

We started with white wines. The white grapes from the 2015 Peilhan plantation have been blended with others from older vines in Peilhan such as Carignan Blanc, Maccabeu and Grenache Gris. The small quantity means this will be used for a barrel aged wine. It had finished fermentation and had good fruit with a liquorice streak and depth of flavour. Another batch of the Grenache Gris and Maccabeu was still in malolactic fermentation and cloudy with apples and a directness. Similarly the whites from La Garrigue were still fermenting but with great depth of flavour. There will only be small quantities of any Coutelou white wine, the last couple of years have not been kind to them.

Grenache was the variety which was most affected by mildew, the vines were not pretty and yields were very small. Many of the bunches did not form, many which did suffered from coulure (where only a few berries form) or produced dried, dessicated fruit. The vendangeurs had to be very selective. So was it worth picking? The Grenache from La Garrigue tasted clean with good fruit and a nice acidity. The Grenache from Sainte Suzanne was worst hit of all. Jeff made the wine with only a couple of days on stems as the fruit was delicate. The wine is light as a result, juicy with red fruits, light but tasty.

Cinsault usually provides another light wine and this vintage was no exception. Despite that it was very fruity on the nose and on the finish, a surprising depth of flavour. For rosé, 5SO or both? Jeff will decide as the wine develops. 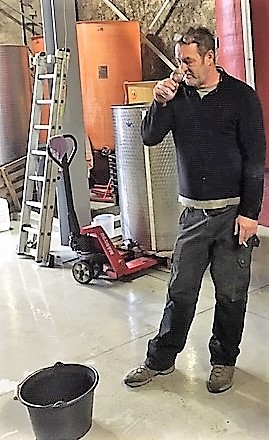 The tank which will make Flower Power 2018 has a bewildering mix of grapes, from the Flower Power vineyard itself, Rome, some Syrah from Segrairals and the reds from the 2015 Peilhan plantation, eg Morastel and Riveyrenc Noir. There was a lot of mouth feel in the wine, with tannin and substance and a concentration of dark fruits.

Cabernet Sauvignon from the last picking has produced a real glouglou wine, light and juicy. It will bring a fruity freshness to any wine it is used for.

Carignan was one grape which resisted mildew for a long time. This is the parcel producing Flambadou, one of the flagship Coutelou wines. Once again it has produced a high quality wine. Lighter in alcohol than usual yet managing to produce a full, ripe and fresh wine whose flavours lingered long after swallowing it. I look forward to this one a lot. 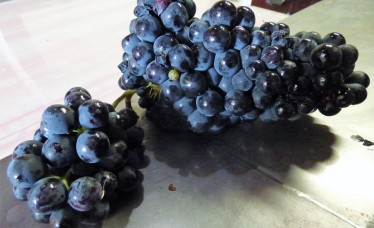 Perhaps the biggest surprise was the Mourvèdre. It has made good wines before, try the 2015 or 2016 for example. However it could be a real star this year. There was a great depth and freshness with dark fruit flavours made to feel lighter by light acidity leading to an almost saline finish. It would be almost drinkable now but will keep for many years and develop beautifully, I am sure of that.

Syrah from Sainte Suzanne was made using grappe entire or whole bunch. Around 14% abv it has a clean acidity with red fruits and soft tannins (from the stems?) which will support a good wine. The Syrah from Segrairals was quite different, the place and destemming produced a more upfront fruity wine with a clean, dry finish.

And, of course, there was the Syrah from La Garrigue, home of my favourite wine La Vigne Haute. Amazingly, in such a horrible year, the quality of these grapes was excellent. Only made in very good years and yet, hopefully, there will be a 2018 La Vigne Haute. The wine has great character already, freshness, fruit, long flavours supported with lovely tannins which will help the wine to age well. Exciting.

So, out of the ashes rises the phoenix, very good wines despite the vintage. The resilience and quality of the vineyards and vines as well as the winemaking skills of Jeff Coutelou.