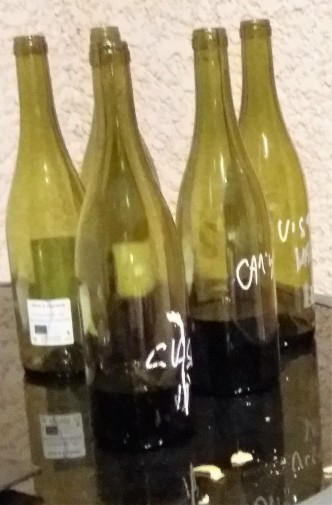 One of the highlights of the last few weeks of the 2018 vendanges was tasting the wines from 2017. A group of our friends gathered to enjoy bottles kindly given by Jeff and we tasted through them, scoring them as went. I am not a great fan of wine scores but it was a simple way of tracking our preferences, we revisited scores regularly to ensure there was some context for the earlier marks.

We started with the OW of 2016, so a different vintage but yet to be released. I have tasted it regularly in recent weeks at vendanges lunches and I really like it. Many orange wines are being made but often they are based on grapes which have fairly neutral skins. OW is made from Muscat D’Alexandrie and the skins have a lot of flavour which the long maceration brings out together with the tannins. This has real character, one of my wines of the night. It must be said that for some of my friends it was too much of a shock, unused to skin contact wines they found it too different. If you like orange wines though, believe me, this is excellent. 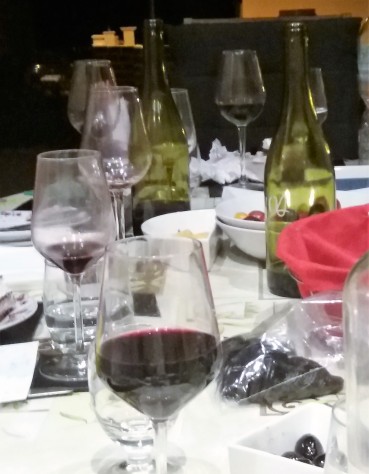 On to the reds. 2017 was a vintage of low yields due to the long, dry summer. However, it must be said one of the consequences is a concentration of flavour and high quality. The six wines we shared were all very good and consistent in their length and full flavour. Perhaps the most consistent of any vintage I have been involved with since I started in 2014.

Vin De Table is a supposedly simple wine. Don’t be fooled, it is very good. Assembled from wines left over from the main cuvées with quite a large portion of Merlot for good measure. It received consistently good scores from everyone, it was simply enjoyable and very drinkable, belying its simple status with good fruit, freshness and length. A bargain at the price of well under 10€ seen in many caves.

Tête À Claques was a wine originally made for London restaurants but now sold from the cellars. It is based on Le Vin Des Amis (what was left) to which was added Mourvèdre and other remaining wine. The Mourvèdre boosts the wine with some crunchy, dark fruit flavours and this was one person’s favourite wine of the night.

The natural successor was Le Vin Des Amis. For two of the group this was their favourite wine of the evening. The 2017 version is based on Cinsault, not the norm. Blended with Syrah and Grenache the Cinsault gives a real lift of red fruit and the result is a classic VDA, a bottle which will please anyone and disappear quickly.

On to the other headlining wine of the Coutelou range, Classe. Syrah, Grenache and more Mourvèdre (there was also a pure Mourvèdre released in 2017 under the name of On Peut Pas Vraiment Dire Que). Classe usually adds a depth and silkiness compared to VDA, it lives up to its name and label. This was no exception, it really is a very good wine and one I would love to age for a year or two even though it would be hard to resist now. One person chose it as their highlight.

Flambadou has been one of the best wines of the domaine for the last few years. Pure Carignan from a vineyard with complex geology the 2017 version is up to those high standards with dark fruits, freshness and ripe tannins. It needs time to mature before it reaches its peak but this is one of my favourite wines and, from experience of this wine, I can tell this will develop into a top class wine.

My absolute favourite Coutelou wine is La Vigne Haute, the pure Syrah from La Garrigue. North facing, villefranchien rock the wine is only released as La Vigne Haute when Jeff decides it is of the required quality, just seven of the last nineteen years. This is the first time I have been involved with making LVH and I am thrilled with it. The fruit is already evident, it is complex, has dark edges as well as the fruit. The flavours are long and fresh with more ripe tannins. It is a beauty, it could be mistaken for a wine from the Rhone or Ardèche. Previous examples of this wine have shown me that it needs 5 years or more to be at it best, 2009 is excellent at present. This will be a wine to treasure for years to come. Three of us chose it as wine of the night. 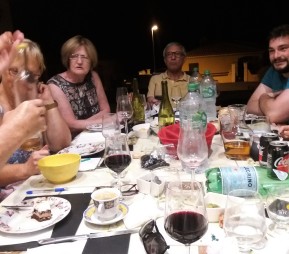 Overall, my friends showed great taste in selecting La Vigne Haute as the clear leader in scoring (I hope my influence wasn’t too strong!). Classe and Le Vin Des Amis followed on a few points behind. However, all agreed as we enjoyed a wonderful half bottle of Vieux Grenache that the wines were excellent, consistently so.

Thanks to May and Martin for being such great hosts and providing lovely food to accompany the wines. And to Pat, Afshin, Denise, Matt and Jonathan for joining in and making it so enjoyable.

A special night. Jeff told me from the beginning that he makes his wines to be shared with friends and loved ones. This was a night to prove the wisdom of those words as well as the immense talent and passion of Jeff Coutelou.

One thought on “Wine with friends, the 2017 Coutelou wines”