You may recall that for French bureaucratic reasons the Coutelou domaine name had to change this year. Mas Coutelou was a combination of the surnames of Jeff’s parents, Mas being his mother’s family name. However, Mas also means a homestead or farm and only wines under Appellation or IGP labels are allowed to have that name. So, family name or not, Jeff’s Vin De France wines, Mas Coutelou for many years, had to have new branding.

Since he was already planning to release new products such as a fine (eau de vie), a kina (like a vermouth) and other spirits Jeff chose ‘Vins et Spiritueux Coutelou’. I have tried the Kina and like it, even though it’s not really my thing. Made from wine and organic herbs from the vineyards it is a very enjoyable aperitif.

It seems that renewal is the signature of the year. There has been much updating of the cellar in recent times; roof, insulation, a form of air conditioning, division of cuves to make it possible to vinify smaller parcels and quantities, resin flooring, better drainage, amphorae, temperature controlled stainless steel tanks. A new management space means that it is easier to see at a glance what is where and adds a tidiness to what was a more chaotic central space of the cellar. 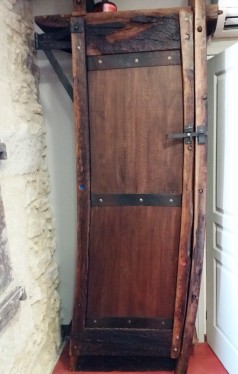 Upstairs the new office space has been fitted out beautifully. Jeff commissioned a couple of local carpenters to make furniture. Using old barrels and a foudre of more than 130 years old they made a cupboard, with themed shelves and a stunning chair for the desk. They are real works of art, true craftsmanship. A table from the Coutelou family home has been skilfully renewed to add a feature to the space.

The empty parcel next to Ste Suzanne

And, in the vineyards more renewal. The small parcel at Sainte Suzanne which has been fallow for many years was supposed to be planted last year, in 2017. A very wet spell then and another this Spring has meant that those plans had to be shelved as the parcel was too wet. However, the vines were already ordered so Jeff has planted them in Segrairals where he had grubbed up some Cabernet Sauvignon. Instead of that extraneous variety Jeff has planted Aramon Noir and Aramon Gris (Aramon being the original grape in the parcel next to Ste Suzanne), Terret, Clairette Blanche, Clairette Rose, Picardan, Olivette, Servan (related to Syrah) and Grand Noir De La Calmette. I must admit to never having heard of some of these. Time to consult my copy of Galet’s wonderful Encycolpedia of Grapes. The Coutelou vineyards are fast becoming a treasure store of rare grapes, there are now several dozen varieties planted.

The very hot and dry month combined with the widespread mildew outbreak have meant that Jeff has spent many hours tending this new plantation, spraying and watering to help the new plants to survive. Happily, all is well.

2018 will always be remembered by Languedoc vignerons as a year of headaches and heartaches, months spent on tractors fighting disease, easy to become disheartened. The Coutelou renewals help to remind us that such problems are temporary.