Busy times. In the vines and in the cellar.

I mentioned recently that the cooler weather had delayed some of the growth in the vines and that flowering was late. Well, recent hotter weather has brought sudden change. Flowering happened around the turn of the month and was over very quickly, perhaps catching up lost time. In particular there was a heavy thunderstorm on Saturday June 4th which brought a torrent of rain. The water and the sunshine has really got the vines going. Tendrils reach for the skies and there is more bushiness to the vines.

The flowers gave way to the little hoods which cover the nascent grapes, capuchons. These quickly fall away too revealing the grapes for 2016. On some vines all of this is happening at the same time such as this Carignan (above) in Rec D’Oulette. The weather has also encouraged the growth of the grafted vines which we did back in March. 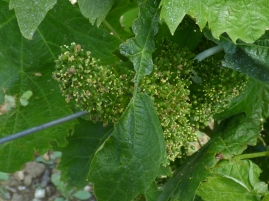 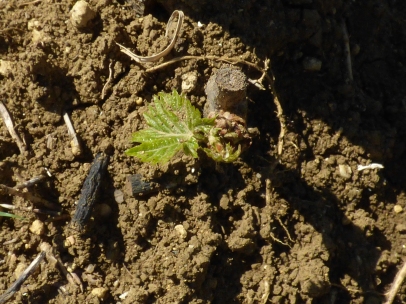 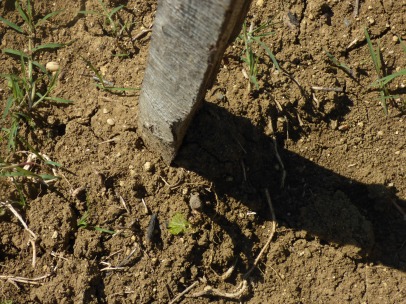 This brings work too. The palissage has to be lifted to support the vines, hard physical labour. And, sadly, the heat and rain bring problems of disease. Mildew has been around for a couple of weeks and I mentioned that Jeff was spraying in the very early hours and late at night last week. He worked until 1am Friday/Saturday and started again at 6am. Just as things seemed to be settling a big attack of mildew on the Grenache at Ste. Suzanne meant more treatment on Tuesday morning. This ‘curious’ year is proving to be hard work. 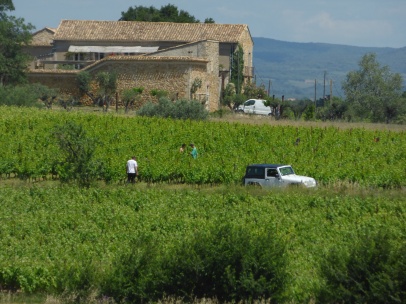 Not all negatives though. The storm brought such a downfall that I was fearful for the flowering bunches. damage to them means no grapes. I happened to be in Puimisson during the storm (next article!) and the rain was lashing down, converting streets and roads to waterfalls and lakes. Yet as the rain eased I went to a couple of vineyards and the flowers were coping just fine. A trip round the vines on Monday morning revealed healthy growth and the soils had absorbed the rainfall. 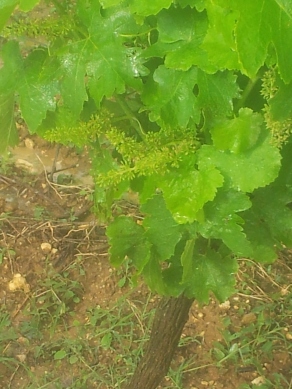 Grenache vines with flowers intact after the storm

This is not true of everyone. Much of the water on the roads was also full of clay from vineyards nearby, hence the yellowy brown colour. Vineyards which are treated with weedkillers, where the soils are ploughed deeply, even irrigated, were unable to cope so well with the heavy rain. Soils were carried away. Compare these photographs of Jeff’s vineyards with the parcel next door belonging to someone else. The difference is marked. Water can help or can damage. 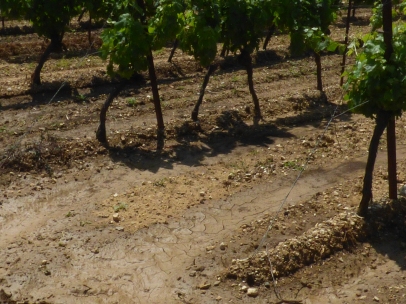 Meanwhile back in the cellar there was more work to be done. Recent changes to the fabric of the cellar, especially the floor, have brought more efficient drains and a smoother surface, easier to clean. Further work will soon be done to the rest of the floor so the bottling of the next wave of wines had to be brought forward to allow the works to be done and dusted before vendanges. 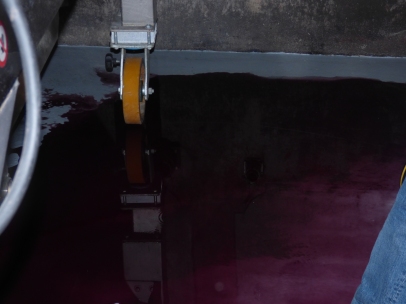 The spring bottling of wines such as 5SO, PM Rosé, 7 Rue De La Pompe I described earlier. These are wines for early drinking, vins de plaisir. Now it was time for wines with a little more body. On Thursday June 2nd 10,000 bottles of Classe were made, and it is really something special in 2015. It took almost 12 hours and went very smoothly but believe me it is a hard day’s work. On Friday, Flambadou, made from the Carignan vines above, was bottled along with other smaller cuvées. 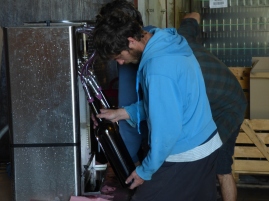 Before anyone rushes in with orders Jeff will let these bottles rest for a few months to allow them to be at their peak when released, Flambadou probably in 2017 for example. There remains one or two cuvées still in tank which need a little more time, Flower Power being one.

So, most of the 2015  wine is now in bottle, the vines are revealing the grapes for 2016 and there are wines stored for 2017. Busy times at Mas Coutelou for everyone, well except one. 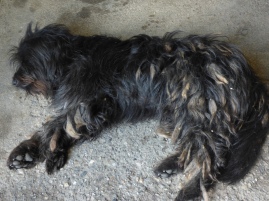 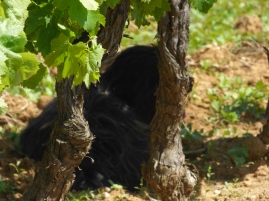