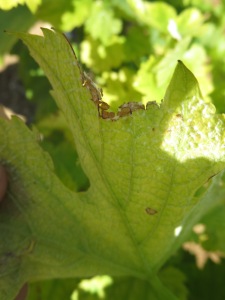 May was a drying month. Lots of sunshine with temperatures comfortably in the high 20s almost every day. However, this year was also marked by high winds. The Tramontane / Mistral blew for over a week and was truly maddening. Other winds meant the vines spent almost three weeks blowin’ in them.

With the rise in temperatures during the day and cool nights natural problems emerged. Oidium or powdery mildew showed itself first encouraged by the humidity resulting from daytime heat and cold nights. 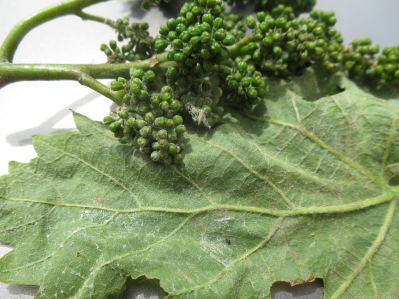 Oidium on buds and leaves

This was followed by mildiou or downy mildew and vignerons all around the region were talking about its appearance by mid May. And in fact the high winds were helpful here, drying the vines and lessening the impact of mildew. At this stage if the vigneron can get on top of the disease then it is not a huge problem unlike if it were to get amongst the grapes later in the season as this could influence the taste of the wine. 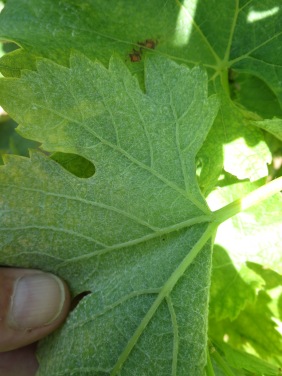 Mildiou on a leaf near Margon

Mildiou scars and chemical treatment used to treat it (Margon)

Oidium can be treated by pesticides. Pesticides refers to any treatment which will get rid of problems, animal or fungal. Conventional vignerons will use chemicals or synthetic products to spray onto the vines. Organic producers also use a chemical, sulphur (I shall use the UK spelling of sulfur). Many non organic producers point out that sulphur is chemical and does damage life in the vineyard such as yeasts. Organic producers would counter that sulphur has little lasting effect especially on the soils and that sulphur is natural. The amount used will vary depending on the year, in 2014 Jeff used less than a quarter of the amount he had to use in 2013 when there was more oidium around. Other organic / natural producers will no doubt have used more as Jeff uses the least possible. Indeed on Saturday morning he was spraying between 2 and 5 in the morning as he feels that during the night the vines are more relaxed and take the sulphur better, so needing less of it. Not all vignerons would be doing that! In addition he uses horsetail weed and nettles in a tisane to treat the vines so as to use less sulphur. This practice is common amongst organic and biodynamic producers. Conventional producers can use various chemicals instead.

Organic producers would say that these are absorbed by the plant rather than just being in contact with it and so the vine becomes resistant and needs more of the treatment. Many conventional vignerons would deny this and say that synthetic chemicals are longer lasting and reduce quantities.

Mildew is more complex. The traditonal treatment is copper, again a natural product but one which does leave its impact upon the soils and their ecosystem, for example killing worms and some mushrooms/fungae which support the soil. This inevitably draws criticism from conventional producers. Organic producers in one of the licensing bodies, Ecocert, are allowed to use up to 30kg per hectare over a 5 year period, averaging 6kg per year but amounts can vary annually according to the risk of mildew within the 5 year limit. Jeff used 2.9kg in 2013 but only 0.9kg in 2014 so well under the limits allowed.

So as a wine buyer you have choices to make. As ever much depends on the producer. There are some who spray chemicals in large quantities, usually for cheaper, bulk wines. Select wines by the producer if you know them, knowing that their practices aim to support the health of their soils and their vines.

However, May brought one final twist in its tail. Just as the winds helped relieve the problem of mildew they created a new problem. Jeff contacted me on Friday to say that coulure was showing in the Syrah vines of one vineyard. Coulure is the uneven development of grapes. Flowering is a highly delicate time for the vigneron as they are very fragile. The wind damaged some of them and the Syrah vines especially. Without a flower the grape can’t develop. So the bunch will have some but not all grapes, leading to reduced yields. 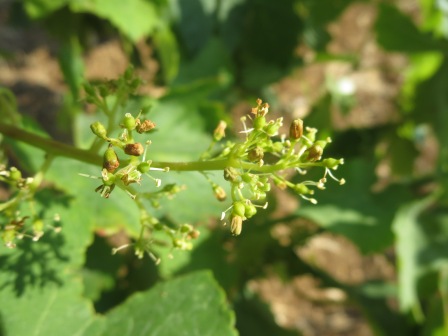 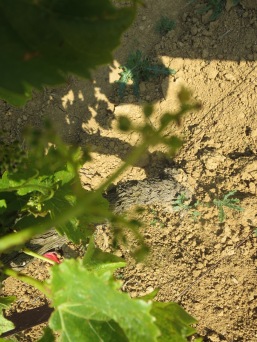 Not a clear picture but you can see the uneven development

The remaining grapes will grow a little larger to compensate but not enough to make up the losses. Not good news, especially for lovers of Vin Des Amis like me. All the vigneron can do is wait and see how things develop, patience is required. As ever nature rules the day. 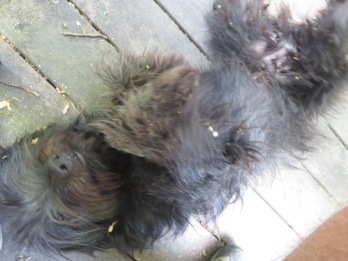 At least one member of the team is laid back!

5 thoughts on “There May be trouble ahead – disease”