After weeks of sunny and hot weather storms have hit the region in the last few days. Monday (June 8th) saw the first and hail hit Faugères nearby damaging some vines at Domaine Sylva Plana for example. Hail is a nightmare for vignerons, it can strip the vines of leaves and budding grapes at this stage of the year. Today (June 12th) the storms are back with lots of heavy rain.

The water is welcome, the long weeks of sunshine and high winds have dried out the soils. Steady rain would be better but water will help the vines and reduce stress. However, if the rain turns to hail then disaster strikes.

The vines have had a hard time in the last year or so, a dry winter and spring in 2014 certainly reduced yields as the vines were stressed. The mildew and oidium which arrived in early May added to their problems. I also mentioned that coulure hit Mas Coutelou as the high winds damaged the delicate flowers. Sadly the problem is widespread across cépages and vineyards. Jeff estimates that it could reduce yields this year by up to 30% compared to an average year and that after reduced yields in 2014. 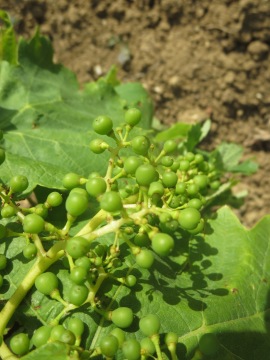 Jeff already announced that certain cuvées would not appear from the 2014 harvest, it looks as if that will be repeated in 2015. Bad for those of us who love Coutelou wine but mostly for Jeff himself.

The storms and rains also bring humidity so mildiou will undoubtedly be a threat again. Treatments will be needed. Some vignerons in the area, and certainly in cooler regions, will be pruning and cutting back the lush growth of vines. This allows more air to circulate and therefore hopefully reduce the risk of mildiou. In the Languedoc, heat and sunshine is more common and the grapes will need protection from the direct sun so Jeff prefers not to cut back the main growth, the frequent winds will allow air to circulate naturally without it. However, some particularly vigorous branches will be cut.

The other main vineyard task will be to remove the gourmands, the buds and branches which grow directly on the bottom part of the vine trunk. These simply use up the vines’ energy.

Gourmands (side branches) growing on the trunk of the vine

Finally the palissage wires need to be tightened as they have heavier vines to support. The vine branches can grow between 10cm and 15cm per day at present.

Meanwhile bottling, tidying, cleaning and alterations are happening in the cellars and wine salons/tastings have to be attended to sell the wines that remain (not so many this year). The vignerons must be as vigorous as their vines.

Let’s hope that the stormy weather passes without further damage and that nature helps the vines for the rest of this summer allowing them to produce as well as they can in 2015 and to recover and become stronger for 2016. 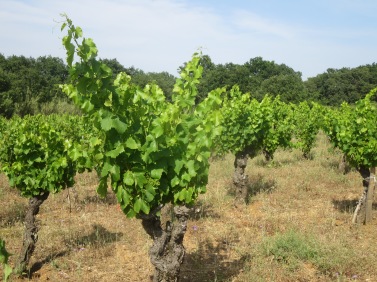 One thought on “Stormy weather”