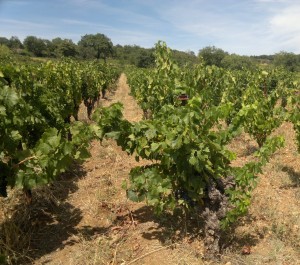 My last post about the organic control stirred up a few reactions from a number of people. I don’t set out to upset people but I recognise the debate about organic status. This website from Domaine du Garinet in the Lot summarises the debate quite well, have a look at what it says about viticulture.  Organic viticulture allows the use of some chemicals which many feel are damaging to soils and their ecosystem, eg the use of copper is allowed yet remains in the soil for many years and is damaging to potentially beneficial animals such as earthworms. Other winemakers feel that there are now alternative treatments which they can use which do less damage to the biodiversity of their vineyard but are not allowed by official organic certification.

Instead these winemakers use a system called lutte raisonnée or agriculture raisonnée. Jonathan Hesford runs Domaine Treloar in Trouillas, Roussillon with his wife Rachel using this approach. They make excellent wines across a wide range, white, red, rosé and different wines such as a Rivesaltes Muscat and a Rancio. I have visited the domaine several times and bought more in the UK and will continue to do so. Jonathan is one of a number of winemakers who have moved into the Languedoc Roussillon from outside the region and have brought new ideas and a fresh approach. Jonathan and Rachel lived within a few hundred metres of the World Trade Centre in September 2001 and witnessed 9/11. That shocking event influenced them to live differently. Wine study and time working in wineries in New Zealand (Rachel’s native country) gave them the confidence to establish their own domaine in Trouillas.

Jonathan and Rachel put as much dedication, thought and passion  into their wines as any winemaker. Jonathan was quick to point out  to me after my last post that many, if not most, artisanal  winemakers nowadays care about their terroir and minimise  chemical use, whether organic or not. Jonathan says, “My decisions are based on on what, scientifically, are best for the vines, the soils, the environment and me, the guy spraying. In many cases the organic product is more dangerous or more environmentally damaging that the synthetic product I have chosen.” He does not seek organic certification as he does not welcome the bureaucracy and feels it is often a marketing tool. I have spoken to other French winemakers recently who have said exactly the same thing. For further information on Jonathan’s approach look at his own website page.

The wines are testament to his skills and beliefs. They shine with the freshness which I love in wine and reflect the healthy fruit which he produces. Particular favourites from my visit in early November were the white La Terre Promise (Grenache Gris dominant) and the red Three Peaks (Grenache, Syrah, Mourvedre) but I can honestly recommend all the wines.

Mas Gabriel is run by Deborah and Peter Core an English couple. The domaine is based in Caux, not far from us and is run along organic and biodynamic practices. Their reasons for doing so are explained far better by themselves on their website than I could do so please have a look. There are many parallels with Jonathan and Rachel in that the Cores left successful jobs in a big city to follow a dream to be winemakers. Both Peter and Deborah studied winemaking in New Zealand and worked in wineries there and then in Bordeaux before settling in Caux.

It is interesting that despite similarities they took a different view about winemaking to Domaine Treloar by pursuing organic and biodynamic practices. Deborah and Peter spend many hours in their vines debudding them when necessary to allow more aeration and therefore less risk of humidity leading to mildew. They, like Jeff Coutelou, are allowed to use copper and sulphur but in fact use less than one third of the permitted level of copper, treating only when necessary. A recent survey by a botanist found over 40 plant varieties in their vineyards, a sign of health and diversity. 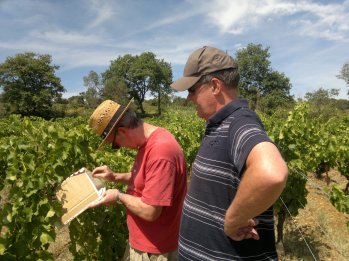 With Peter in the vines

Again the proof of their hard work and passion is in the bottle. Mas Gabriel produce 4 wines, a white (Carignan Blanc dominated), rosé, and two reds. The white, Clos Des Papillons, is one of my favourite white wines from Languedoc Roussillon, dry with fruit and body it is a wine which makes you contemplate and smile as you drink it. The reds from 2012 and 2013 which I tasted during a visit at the end of October were also fresh and fruity yet contain complexity and depth. No doubt in my mind that the range of wines is all getting better and better, a testament to their growing skills and experience both in the cellar and in the vineyard.

So there we are, two excellent domaines. They all work incredibly hard and give everything they  have to produce the best, most healthy fruit from their soils. Yet in different ways. Both produce superb wines which I would strongly recommend without hesitation. Both have different views about the way to look after their terroir and I have compared them here for the sake of my debate about organic winemaking not in terms of quality. That would be unfair and impossible as they are two of my favourite domaines in France as my own wine collection would attest. Incidentally I say that not because of their English & New Zealand origins but because of the quality of their wines. I will be posting soon about some of the diversity of winemakers in the Languedoc Roussillon.

I attended a conference last Thursday where the famous vineyard analysts the Bourgignons (advisers to Romanée Conti amongst others) set out the chemical, geological and agricultural make up of healthy soil. Amongst the interesting points to emerge was that the vine takes over 90% of its needs from the air and about 6% from the soil but that 6% is what can make the difference in quality of a wine. It is certainly produced by passionate, artisanal producers. But is it best achieved through agriculture which is organic, biodynamic, natural or raisonnée? I have a lot still to learn. 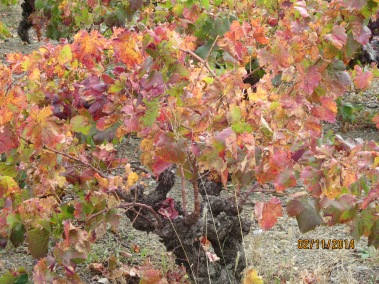 6 thoughts on “Diversity and debate”