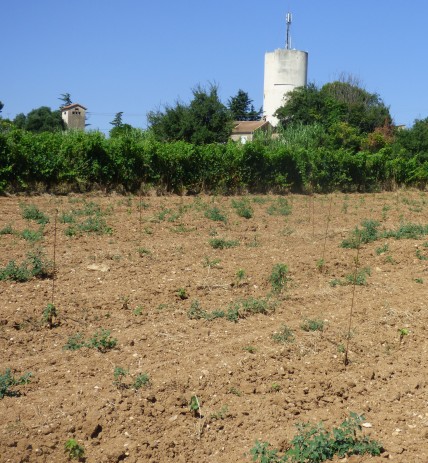 The new plantation, originally designed for the parcel at Sainte Suzanne contains a number of rare grape varieties. That parcel has been so wet that Jeff decided not to go ahead there, instead he planted them in Segrairals after grubbing up some of its Cabernet Sauvignon vines. To the right of the Cabernet the white vines were planted with red varieties to the left side.

Origins: A Mediterranean grape, famously associated with Adissan in the Hérault. There are different varieties; Clairette Blanche, Clairette Rose, Clairette Musquée etc. (Jeff has had Musquée for some years, this was one of the grapes which Domaine de Vassal had not known about until Jeff visited). It is also known as Blanquette and Malvoisie (not to be confused with the Italian grape of that name). 2,200ha are planted, down from 14,000 in 1958.

Bunches: above average in size, compact, cylindrical with average sized grapes. Leaves are quite round though the top sinuses are distinct.

Growing: Late budding, ripens at a normal rate*, vigorous so might need pruning. Can be vulnerable to mildew and vers de la grappe (moth larvae which grow in the berry, the juice can then spoil the whole bunch).

Origins: South of France, Provence (this is a grape which can be used in Chateauneuf Du Pape). Sometimes called Oeillade Blanche (not related to Oeillade Noir which Jeff has already), Aragnan and Milhaud Blanc. In 2011 only 1 ha was being grown, that in Provence.

Bunches: average sized, compact, long stems with small to medium grapes which start a yellowy green and develop a pink tinge by maturity. Leaves have 5 distinct lobes with marked teeth

Growing: Late budding, vigorous, ripens at a normal rate. Quite hardy against disease but prone to mites.

Wine: usually blended with others, often in rosé wine, aromatic.

Origins: Unknown though likely southern France, not related to Olivette Noire. Sometimes called Servan Olivet or Rognon. One advantage of Olivette Blanche is that the flowers are female so it is a handy variety to plant amongst others which are dominated by male flowers. Only 1,8ha are known to be planted so this is a coup for Jeff.

Bunches: average sized, straight rather than conical in shape. Stalks stay green. Irregular sized and shaped grapes which can grow big. Greeny yellow in colour and fleshy. Leaves are 5 lobed though these are not distinct V shaped sinuses help to distinguish it.

Growing: Average budding, vigour and ripening. Sensitive to coulure and millerandage (meaning some berries don’t develop in the bunches).

Wine: As a result of its irregular growth this is not an easy grape to prune and train so it has become little grown.

Origins: Probably Languedoc. Sometimes confused with Le Gros Vert which is a different grape. Also known as Servan, Colombal and Nonay. Only 75ha remain in the Hérault (there used to be more than 4,000ha) with another 50ha in Italy.

Bunches: Average to big in size with grapes which have quite thin skins and turn slightly pinkish on maturity. The grapes are quite fleshy. Leaves have 5 distinct lobes and deep sinuses.

Growing: Budding is normal, ripening later than average. Vigorous growth and as the vine ages it starts to grow lots of grapillons (side bunches). Quite a vulnerable variety, prone to millerandage, mildew, oidium and does not like the soil to be too dry.

Origins: Languedoc. There are different types and Jeff has these in Peilhan vineyard too; Terret Bourret or gris and Terret Monstre or blanc. Another variety used in making Chateauneuf Du Pape and other Rhone wines. This variety has doubled in surface area in the Languedoc in the last 50 years. 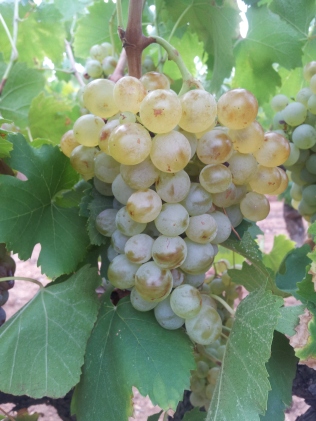 Bunches: Average to big in size, the bunches develop in a pyramid shape and are compact. Grapes can be round, thick skinned and juicy. The leaves tend to redden in early autumn. Leaves are fairly compact the top 4 lobes looking like one large one.

Growing: Late budding and vigorous. Prone to mildew and oidium as well as vers de la grappe. Can get sunburned easily.

Origins: Probably Languedoc. Used to be planted all over the region, one of its names was Pisse-vin because it is the most fertile of all grapes and produces large quantities of low alcohol wine. This was the grape which made most of the wine given to troops in the French Army in World War 1 as well as sold to the ordinary people of Paris. There were over 150,000ha in 1958 now there are only 2,260ha.

Bunches: Conical shaped and very big, weighing 400-600 grammes even over 1kg. The grapes are also large in size, spherical and very juicy with thin skins meaning the grapes can burst open if not handled carefully. Leaves are thin and 3 lobed

Wine: Fairly neutral with little colour if allowed to grow unchecked. With careful pruning and green harvesting the wine can be fresh and juicy.

Origins: This is a cross, made in 1855, of Petit Bouschet and Aramon, bears some resemblance to Piqupoul Noir which is also a cross of Petit Bouschet. It has almost disappeared so these few vines are a real rarity, now only 0,4ha in the whole of France though there are 1,000ha in Portugal and more around the New World. Also called Gros Noir and Sumo tinto.

Bunches: Average to big in size, cylindrical in shape with short, woody stalks. The grapes are average in size but some bunches are prone to undeveloped green berries. The skins are quite thick and a rich purple. The juice is quite sweet and reddish as are the pips. Leaves have 5 lobes with prominent teeth and look long.