Wednesday September 9th saw further full on action. The early morning saw the only machine harvesting of Mas Coutelou grapes. This took place in La Colombié the parcel of Merlot vines. These are grapes that don’t especially interest Jeff in terms of making a domaine bottled cuvée but the quality of the fruit is good and they are used to make restaurant house wines and bag in box wines.

The Merlot vines after picking

After that attention turned to La Garrigue, the conical landscaped vineyard to the south of Puimisson. Much of the Syrah had already been picked the previous day and the remaining bunches were harvested. These were to be used for carbonic maceration again and so it was back to the top of the main cement tanks to work, not the easiest place.

Tuesday had seen the arrival of two new faces to support the team as I described in Vendanges Diaries 4. Thomas was working with Cameron in sorting the Syrah whilst Karim assisted Michel in ferrying the cagettes to and fro. The team usually rotates these jobs so that people get the opportunity to try all aspects of vendanges as well as the chance to stretch your back and legs! 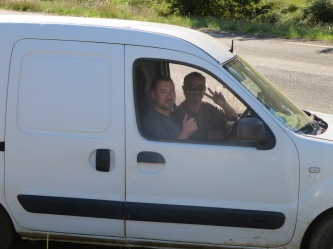 Then it was time to bring in the Grenache of La Garrigue. Grenache is a cépage of Spanish origins and loves the heat so it is planted on this parcel on a slope to the south to maximise the sunshine exposure. The result here was some beautiful bunches of very healthy fruit, easy to sort and giving aromas of spice and dark fruits even before it turns into wine.

Grenache grapes in the sunshine

Cellar work continued with Cameron carrying out analyses of the fermenting wines. It is worth noting that the natural yeasts of the grapes have been very quick to start fermentation in tank. After a couple of hours of crouching over the tanks in the morning I was happy to be stood at the égrappoir and then to help Cameron with remontages.

Cameron tying himself in knots

Me doing a remontage of Flower Power 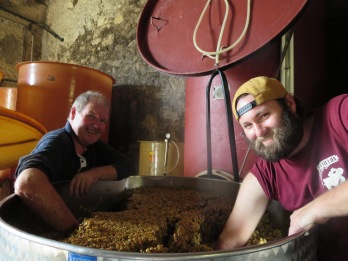 Thursday 11th September continued the harvesting of the Garrigue Grenache and then Cinsault from the opposite end of the village, to the north. More good quality fruit and more hard work from the whole team.

The pressure was on however, the weather forecast was unkind with the promise of storms possibly on Friday, definitely by Saturday. Therefore the more grapes that could be harvested before the rain the better. It was full speed ahead though no let up in terms of sorting the grapes and ensuring the quality of the future wines. We were assisted by the arrival of Céline and Delphine the nurses from Bordeaux who I mentioned in ‘Centiment de Grenaches’. 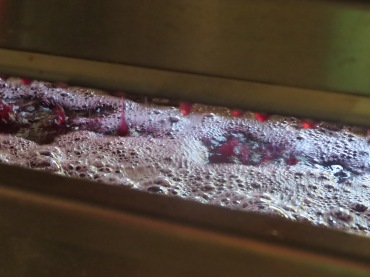 There was a famous advert in the UK for tinned fish by a company called John West which said, “It’s the fish John West reject that makes John West the best”. Well that works for Mas Coutelou too. The Moroccan pickers by now were much more attuned to the strict quality demands of Jeff and were sorting the fruit, leaving any substandard grapes on the ground. Then the sorting in the cellar to check anything which did manage to get through that first tri. It’s the grapes Jeff Coutelou rejects that make Mas Coutelou the best.

Friday September 11th was the day of Centiment de Grenaches, the special cuvée Jeff suggested I make to celebrate the 100th blog post. Meanwhile more Grenache was being brought in for the regular cuvées, work continued apace as the clouds started to gather as predicted.

The night of Friday into Saturday brought 45mm of rain (almost 2 inches) as storms rumbled around the Languedoc. Amazingly some areas had next to nothing, Cabrières for example, whilst rain caused floods and the subsidence of the motorway a few kilometres away near Lodève. The 45mm at Puimisson meant 93mm in total since the start of the vendanges. That makes things more difficult of course as water covered grapes can’t be harvested for quality wines (though I noticed some harvesting in some other vineyards!). The ground is also muddy so picking becomes difficult and the biggest issue is the risk of disease and rot.

Work was therefore centred in the cellar with more remontages and analysis. The wines are now settling and need to be moved to take the juice off the skins and pips, to be pressed if made by carbonic maceration, to let them settle. Therefore the 12th and 13th were hard work as usual for Jeff, Cameron and Michel. Though you will see that it is Icare who is driving the team onwards. 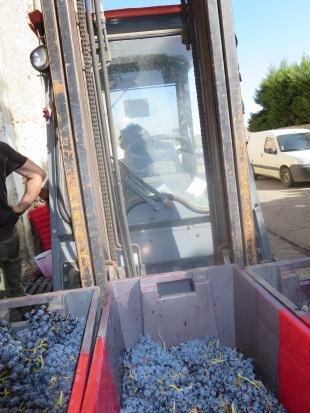