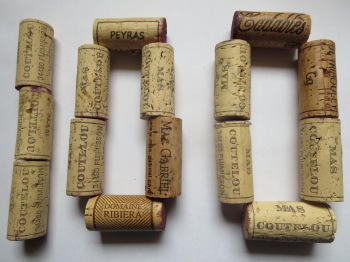 No excuses for using a  French title and a misspelling too. This is the hundredth article on my blog and so a play on the word cent is justified. I mentioned to Jeff Coutelou that this post would be a landmark and he decided that it should be celebrated with something special. I had thought about a review of the previous ninety nine, a greatest hits if you will, but Jeff had something much more spectacular lined up; I should make a special cuvée from the Coutelou vines, and not just any parcel but my absolute favourite vineyard, Rome. 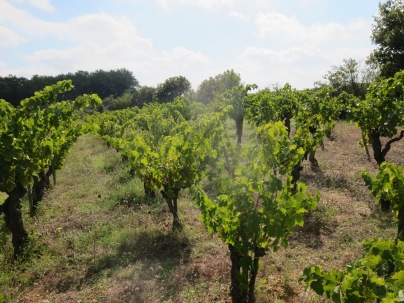 This was such a lovely gift, in the middle of the harvest, a time of increasing pressure and stress, Jeff allowed me to take up time, grapes and equipment to make a special wine. How generous is that?

So it was decided to use the Grenache grapes from Rome a complanted vineyard of traditional, gobelet vines. The Grenaches were planted back in 1962 by Jean Claude Coutelou, Jeff’s father who told me about them at lunch on Friday, the day of the harvest and pressing. There are approximately 4 rows of Grenache Noir but mixed in there are quite a few Grenache Blanc vines and a smaller number of Grenache Gris. These would make a true assemblage of Grenache, a real feeling for Grenache, “sentiment de Grenache”.

My wife Pat was persuaded to come along and do some picking along with our friends Martin and May Colfer, neighbours in Margon, and great people. They had expressed interest in finding out about the harvest and were to get first hand experience! I was also delighted that we were joined by Céline and Delphine, two nurses from Bordeaux who had come down to Puimisson to take part in harvest. It is a mark of how highly Jeff is valued by his friends that many come along to help out and I shall mention more in the next vendanges diaries. Céline had done some picking in the first week of harvest when she and her family were staying with Jeff and had clearly enjoyed it, returning with Delphine. 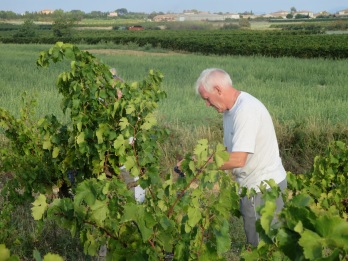 It has to be said that none of us were the most experienced pickers and it took us around two and a half hours to harvest the four rows. One issue proved to be the complantation as mixed in with the Grenache Blanc were some Muscat vines and the Cinsault and Muscat Noir vines were easily mistaken for Grenache Noir. Fortunately my recent articles on ampelography meant that I was able to guide us into collecting the sought after Grenaches with just a few extras. It was made easier by the grapes themselves which were in excellent condition, really healthy. Mixed with Queen tunes and chatter we worked hard to pick and the first grapes were transported back to the cellar along with myself, there to start the pressing. 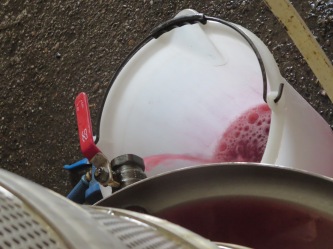 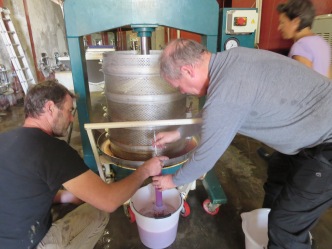 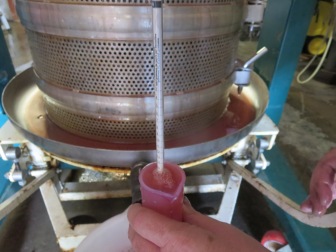 Back to the vineyards to rejoin my friends in order to complete the picking. At 11.45 we had completed all the Grenache vines. I have said before in this blog that I call the vines of Rome vineyard ‘centurions’, as they stand tall and proud. Roman centurions were older, were trained and gave everything for each other. These vines are exactly the same and making an assemblage of the different Grenaches seems appropriate, centurions stand together.

Lunch beckoned and it was good to share together and enjoy some of the bottles of Mas Coutelou, coincidentally including a magnum of ‘Grenache, Mise De Printemps 2014’. As this is the 100th article it also made me think of a year ago when I sat around that table and Jeff told me his story of the <Chaud Doudou>, a fairytale with a moral of sharing and love, very much Jeff’s philosophy. Looking around the table with Jeff, Jean-Claude, Michel from Puimisson with visitors from the Loire, Bordeaux, UK, Ireland and Australia it was hard not to think that this was exactly what that philosophy is all about.

In the afternoon I pressed the grapes three times in total. Between each one I carried out a rebeche, dismantling the gateau of grapes made by the press and rearranging them for the next pressing. The contrast between the black, pink and white grapes was beautiful to look at.

The end product was only around 125 litres of wine after all that effort, this will be a true collectors item so send your bids in now! Jeff thought it would be interesting to see how the wine will develop in different containers, so some went into a 60 litre barrel, more into two, older 15 litre barrels and the rest into a big 27 litre bottle. 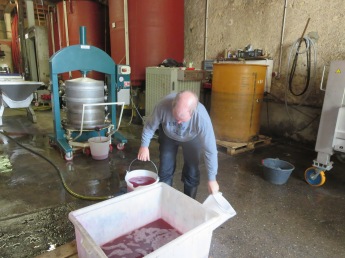 Delphine and Karim checking my work

During the whole process other parts of the cellar were busy as more Grenache from Sainte Suzanne were brought in. Yet Jeff gave me his time, advice and encouragement through it all. What can I say? I am a very lucky man to have been able to share my experiences with you all through this blog and I am grateful to very one of the 10,000 people who have read my words in just over a year. It has been an exciting and hugely enjoyable time and hopefully this cuvée will embody the sentiment of sharing and love and represent the beautiful Rome vineyard and the amazing generosity and talents of its owner.