I was reflecting on two wine blogs which I read recently (Frankie Cook and David Crossley) Independently they were writing about how we got into wine and how, over the years, our tastes have changed. 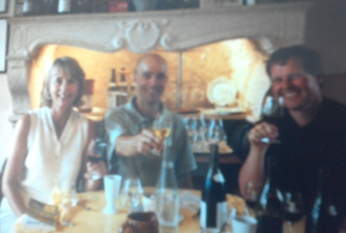 Pat and myself with our tasting guide at Olivier Leflaive, Puligny Montrachet

I was brought up in a County Durham small town, Crook. My family were teetotal and brought me up as a Methodist. This meant that alcohol had virtually no impact upon my life for many years, the pub was not a part of lives other than the occasional meal whilst on holidays. Wine was an alien concept, something which posh people and foreigners drank. Even during my time at Liverpool University I drank some beer but never wine. That I should turn out to be horse racing fan with passion for wine may be seen as something of a reaction to that upbringing though it should be said that my childhood and youth were wonderful and I would not change anything about them.

So it was a school trip which ignited my interest in wine. As a teacher. I was asked to accompany a visit to the Rhine Valley in Germany in 1982. The hotel where we stayed was big and old fashioned, in the centre of Bacharach not far from Rüdesheim.

The hotel owner was a very sociable and generous host and every evening he would offer us wine to accompany our meal and then he would teach us about the local wines and how they could vary in levels of dryness or sweetness and according to site and winemaker. (I hasten to record that two teachers would abstain to supervise the children). Well his teaching was a revelation! As far as I knew wine came in two types, red and white just as there were different flavours of soft drinks such as Cola, lemonade etc. Our host opened up a whole new world of how wines could vary so much even within the same place and vintage never mind from other regions. How I wish that I could remember the name of that German tutor, he set me on the road which leads to the Languedoc in 2015.

With Oz Clarke at a London tasting, his books taught me so much

From Germany to Australia. 1980s Britain saw a boom in wine interest in Britain, fuelled by television coverage, magazines and books. My chosen guides were Oz Clarke and Hugh Johnson, different in approach but knowledgeable and with a great ability to communicate their enthusiasm and to educate me with their words. At the same time the arrival of New World wines, especially from Australia, and Oz’s championing of those wines widened my tastes from German Riesling, though that remains my favourite white wine type it should be said. Huge stonking Shiraz, colourful Chardonnay and cassis-heavy Cabernet Sauvignons were the order of the day. Wyndhams Bin 222 and 444, Penfolds Bins 128 and 389, then cheap! Massive amounts of oak (often from wood chips added to the barrel) which today would make me shudder and wince.

Add in the Sauvignon Blancs which were starting to arrive from New Zealand, tropical fruits, cut grass and cat’s pee aromas. Cloudy Bay Sauvignon was the bottle to find, indeed it was rationed out. And trips to Oddbins, the most dynamic of wine retailers, who offered Penfolds Grange Hermitage for around £20 (now over £200), why didn’t I buy it all? 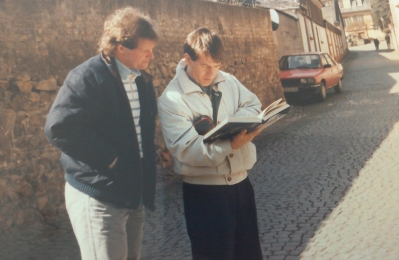 From the Antipodes to France. By the mid 1980s I was a regular holidaymaker in France, profiting from school holidays in summer. The Loire was the first region visited and particularly tasting wines in Vouvray. Dry, appley Chenin Blanc wines which could magically also be sweet and luscious vins moelleux in the hands of winemakers such as Huët, Foreau and Fouquet. 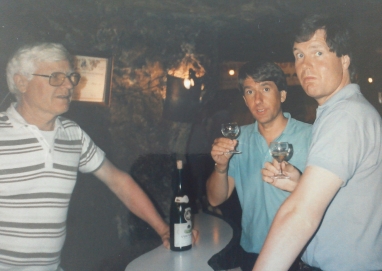 A startlingly youthful me with my brother in law Iain in the Cave Madeleine, Vouvray.

My first wine fair was in the troglodyte Cave Madeleine on August 15th. I assumed you drank rather than spitting the wines and rolled happily down the street back to the accommodation. Then onto Burgundy, Alsace, Beaujolais, the Rhone Valley, Bordeaux and Jura. Some were more welcoming to wine drinkers than others. Great welcomes from people like Martin Schaetzel in Ammerschwihr who opened bottles generously. I met lovely people whose passion for their work and wines was freely shared with visitors. Louis Champagnon in Chénas was always a man who greeted you with a smile, food, a joke and great modesty.

The Échezeaux producer who shared her Grand Crus, knowing that as a young teacher I couldn’t afford them (sadly I still couldn’t 25 years later!). Sadly, Bordeaux was different, most producers kept their doors firmly closed, though I still loved the wines. I tasted first growths such as Haut Brion at generous merchants such as Hungerford Wines. I bought en primeur in 1990 and struck lucky with a great vintage and wines from La Lagune and d’Angludet at just over £100 a case.

My experiences broadened, more tastings, more wines from around the world but especially France. As a teacher my budget was limited and I relied upon Oddbins, The Wine Society and supermarkets to find good wines. Plus I got bolder in knocking on doors, a remarkable visit to Didier Dagueneau and his wonderful Pouilly Fumés for example. In Germany trockenbeerenauslese wines were offered and I even learned to pronounce it.

A March in the vines of the Loire

A March in the vines of the Rhone

A March in the vines of Alsace, golden autumn 2001

Blind spots remained however, Italy and Spain in particular, much to my brother in laws’s disbelief. California too though a visit to the USA (South Dakota and Seattle) showed me that good wines were abundant there, and oh those ice wines in Canada! Lovely. A trip to Sicily also opened my eyes to the possibilities of Italian wines, the Frappato grape and Etna wines were revelations.

Well 30 years of wine drinking brought joys and disappointments, bargains and rip offs. Memorable bottles, glasses and also corked wines, a whole case of expensive Chablis was one painful low. A hundred bottles stored away has turned into five hundred. And then with age the question, when will I drink it? Why buy expensive en primeur which won’t be at its best until I’m too feeble to drink it or indeed incapable of drinking it. 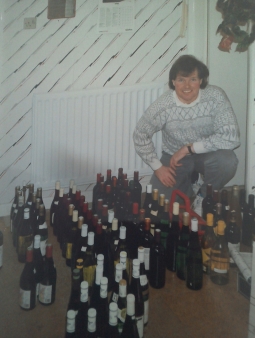 Sorting and happy (and hair!)

Tentative steps further south in France in the last decade. The Languedoc. Rosemary George was my guide through her book and blog to discovering the well priced and under rated wines of the region. Wines which offered pleasure but also, from many producers, complexity. A chance visit to Puimisson and Mas Coutelou as that was the domaine Rosemary wrote about when I was in the area. The expected half hour visit turned into three and a half hours. Even after visiting hundreds of vineyards and cellars I was flabbergasted. Vineyards without chemicals, wines without sulphur, a solera! In Puimisson?? All true. Above all a generous, passionate man and generous friend who happens to be a great winemaker. And a teacher about the vineyards and winemaking who encouraged my interest and deepens my understanding and who agreed to being the focus of a blog to keep me busy. Le Vin Des Amis indeed. Retirement, the chance to spend a year, indeed more, in this fabulous region. Learning, living.

6 thoughts on “Wine and me, a journey to the Languedoc”