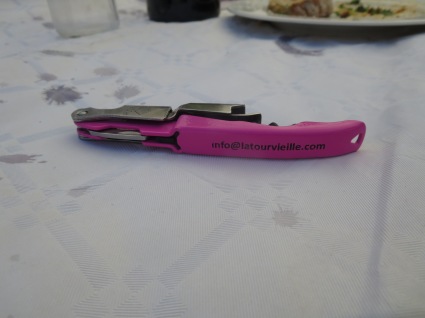 In recent months I have been honoured to be asked to take part in a number of wine tastings. Mostly these were regular tastings of wines where the producers present some of their cuvées and the tasters choose which stands to visit and to taste at. It is good to chat to the producer to try to get some idea of how they work and some background to the wines. Of course there are drawbacks, if you don’t like the wine then you have to choose how to respond. I have seen some people simply walk away without comment but personally I tend to be diplomatic and utter bland statements such as “Interesting”. Alternatively, I may ask questions to avoid making a comment before thanking the producer and moving on. 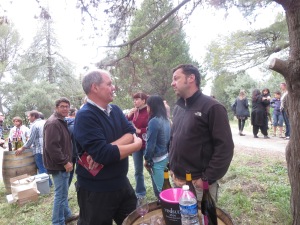 I am always wary of how much I have drunk at such events and I think it is important to remember that wine is an alcoholic drink with consequences. At a recent event in St Saturnin I tasted around 60 wines, spitting of course. This was a paid for tasting and as well as the glass the organisers provided a bag which included an alcotest, a breathalyser. I decided to try mine after the tasting and was surprised to see that it measured only around half the drink driving limit of 50mg per 100 millilitres. Not that I was driving back to Margon I hasten to add. Even spitting wine after tasting it absorbs alcohol into the body. I had expected it to produce a higher reading but was unprepared to drive with even that amount.

At other events I have tasted many more wines, up to 450 in one day at Millésime Bio in January (where I used the tram to get back to the hotel). The question people ask is how can I taste the wines properly after even a quarter of that number? In years gone by I attended big tastings in London and Edinburgh for example and I remember palate fatigue setting in. I tried strategies such as whites first, then sparkling wines to refresh and finally reds but I often found that I quickly tired of the reds even after short breaks. These days I have become more used to larger tastings and my palate is more trained. I can’t argue that my tasting ability will be diminished but I do feel able to assess wines reasonably well for much longer than I used to do.

A different problem which does affect that ability is that of getting used to wine styles. Tasting a lot of Languedoc reds for example I do begin to expect certain flavours and styles and so look for them rather than treating each wine on its own merits. Indeed, if a different sort of wine is then presented, eg a dessert wine or a different grape variety, the change is often very welcome and so the risk is of giving it more credit than perhaps it deserves. 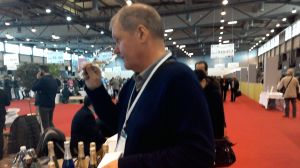 I was also asked to taste series of wines for Guide Hachette, an enjoyable experience and definitely an honour. These tastings are carried out blind, the wines wrapped in covers so that the tasters cannot see the name of the producer to avoid conflicted interest or bias. Divided into groups of four we then compared notes after writing copious notes on appearance, aromas and taste as well as thoughts on possible food matches, and an overall judgement and mark out of 5. Happily the tasters were usually fairly consistent in their assessment of the wines, the training and experience of the jurors came to the fore. I was relieved that my marks were in line too! Even then the fact that the vintage and grape variety was given, so some level of expectation and prejudgement is in evidence. Overall though I felt reasonably confident that the marking was fair. 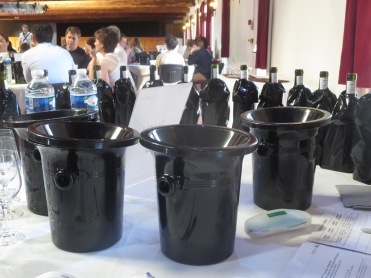 Wines waiting to be judged at Sudvinbio

Then last month I was asked to judge at a competition for Sudvinbio, organic Languedoc wines. I was on a jury of older vintages of Languedoc red wines. Again the mix of vigneron, oenologue, journalist, sommelier and blogger (ie me) were fairly much in agreement. Three wines stood out and deserved some recognition. However, we had been asked to award 4 medals which I did find a little odd. How can you decide in advance how many medals should be awarded? In the end a 4th wine was given a medal, but this was much more disputed with some liking it, others (including me) not liking it. I remain unconvinced by competitions though it again gave me some confidence of my own tasting ability. 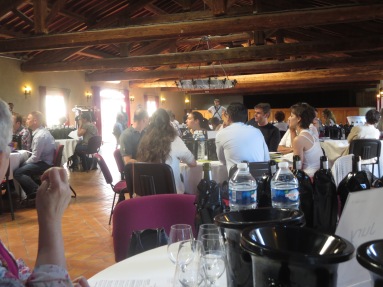 Tasting is a personal experience, what I like you may not and vice versa. Experience of tasting wine does help us to appreciate and, for want of a better word, judge wines. We do bring prejudices to tasting, for example I know that I find Merlot and, especially, Cabernet Franc difficult.

There are all kinds of psychological and physiological factors which affect our ability to taste, from temperature to mood to patterns of tastebuds. Jamie Goode’s book ‘Wine Science’ has a fascinating chapter on the psychology of tasting, highlighting the work of Read Montague in Texas for example in showing how our prejudices can affect our taste.

All I can do is build on my experience, try to be aware of my own prejudices and be honest about my assessments as snapshots of wines at a particular moment in time and to my taste. It is however, a most enjoyable databank of experience to compile. Thank you to all those who are helping me to do so. Meanwhile don’t forget to enjoy the art of the vigneron.

2 thoughts on “Taste and art”