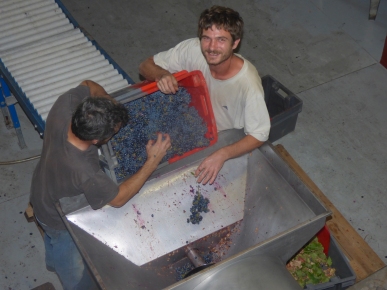 In other words, the finish. Well, the finish of the picking. Tuesday September 12th was so much calmer than the previous day as the Cabernet Sauvignon from Segrairals arrived. 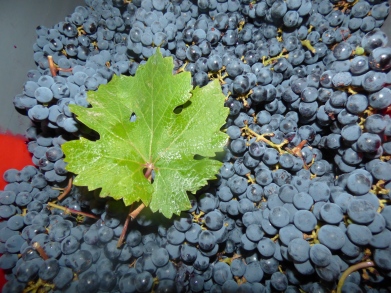 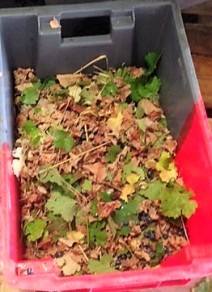 Thoughout the vendanges the grapes have been good, smaller than the norm because of the dryness, but in excellent health. The Cabernet was no exception. Sorting was all about snails and dry leaves rather than any problems with the grapes and the vat filled gradually, problem – free, as the day progressed. The stalks were brown showing the maturity of the bunches as the third érafloir of yesterday completed its job efficiently. 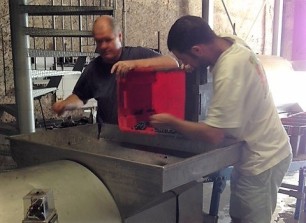 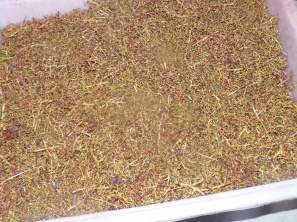 As we awaited the first cases Jeff and I went around some of the vats and took samples for analysis as well as tasting the wines. I wish that I could convey the bready aromas filling the cellar of the yeasts at work, they give such a sense of change, optimism, alchemy. 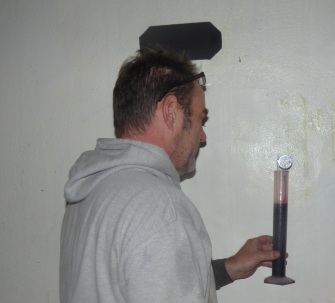 Amongst the wines we tasted were two from 2016, Syrah and Grenache, which have been sparked back into fermentation by the very presence of this year’s grapes in the cellar. The process is truly amazing. The glass in the photo below shows the top Syrah from La Garrigue harvested two weeks ago, which just may become La Vigne Haute. It is a stunner. 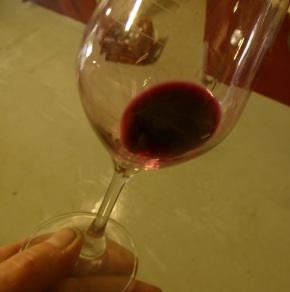 Quality across the board is undoubtedly high though Jeff is counting the cost of the quantity, his first estimates are that the overall yield will be around 39 hectolitres per hectare. Average years would give between 50 and 60 hl/ha.

Joining us on the day was a  former student of Jeff and Vincent restaurateur Régis Lamazère and his wife and baby. Régis runs his autonymous restaurant in Berlin where Charles who was here for vendanges 2016 used to work. 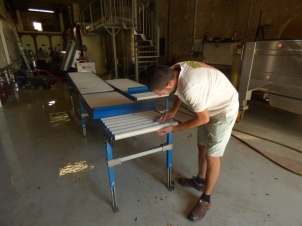 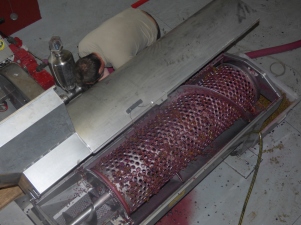 After the grapes were in and the last cases sorted by Julien and Vincent it was time to start serious cleaning of all the equipment which will be put away for 2018. The picking may be over but the work never stops. A full programme of pressing, remontages etc is in place for the next week. Stay tuned. 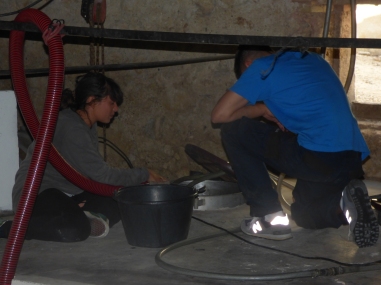 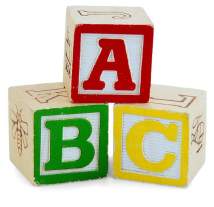 “Quelle journée!” That was how Jeff messaged me on Monday evening. Safe to say things didn’t go exactly to plan, nor did Plan B work so it was Plan C in the end. What am I talking about? Let me explain a day which shows how impromptu thinking is important. 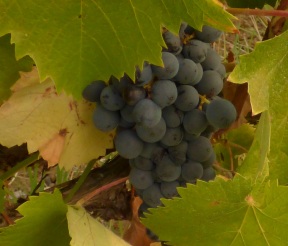 Mourvedre waiting to be picked

Plan A was straightforward and, maybe, things had gone too smoothly up till then. I wrote recently how the team was in the groove and the grapes were being harvested efficiently. Monday was the day for the Mourvèdre to be picked, a real star of the 2016 crop, hopes were high for a repeat. 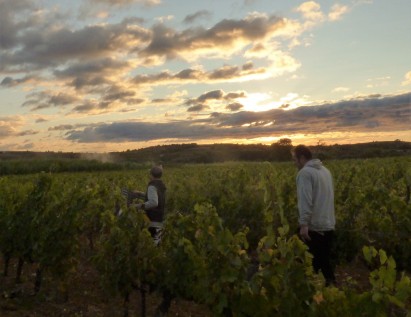 Jeff surveys the Mourvèdre under a gorgeous sky

Everything began well. A silvery dawn revealed grapes in tip top condition though smaller yields in keeping with the vintage. The first cases arrived and I was sorting through them with Matthieu, a trainee sommelier on work placement. And then the destemmer (érafloir) suddenly stopped. On opening the main body Jeff found the fan belt off and one of the wheels sheered away. No easy fix. 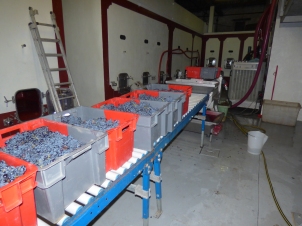 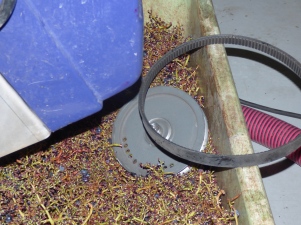 These cases were sorted Plan A ; the offending mechanics

We had already destemmed 20 cases or so and the grapes were in stainless steel tank. With no érafloir, however, we could not destem. Jeff declared that we would have to move to whole bunches. We moved upstairs to the new mezzanine floor created in the cellar renovations of the last two years. Trapdoors in the floor are positioned above the tanks and big plastic chutes are connected so that the bunches can fall through into the tank. The cases are brought by Michel to the upper floor via the garden and then sorted just as carefully. 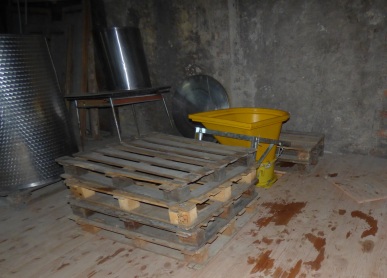 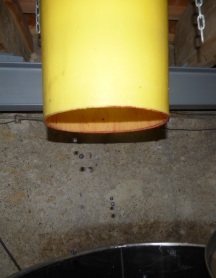 The tank was now filled with destemmed bunches and lots of juice but also whole bunches in amongst that. This was Plan B. A neighbour then offered the use of his destemmer which was brought down and put in place whilst Plan B was working. We started this and did a few cases of destemming again but it was a big machine, meant for huge quantities of grapes and was too powerful for the amount we were processing. 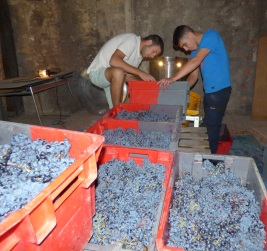 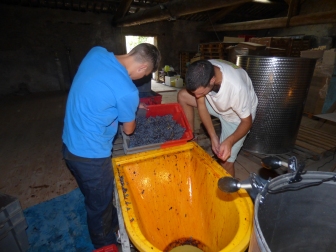 Lunchtime. Reflection. Back to Plan B, whole bunches.

Meanwhile Jeff took the original destemmer to the repairers who declared it unrepairable! However, these were the same people who had renovated the cellar and they kindly offered Jeff the use of a third érafloir. Plan C. This proved just the job, even quieter and more efficient than the original. So, we have an interesting tank of Mourvèdre, a millefeuille of grapes, juice and stems. No doubt it will still produce very good wine as the grapes were healthy and of very good quality. However, it had been a day to try Jeff’s patience whilst other tanks also demanded his attention. 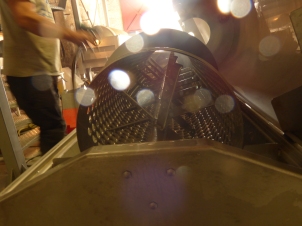 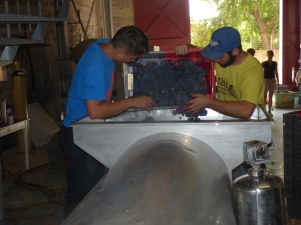 The third érafloir of the day ; Matthieu and Ambroise

He had also damaged one of the large tubes used for pumping the grapes and juice first thing, I think a black cat must have crossed his path on the walk to the cellar that morning! All’s well that ends well however, but it was certainly proof that you need to have contingencies and how experience can help a vigneron to overcome adversity. 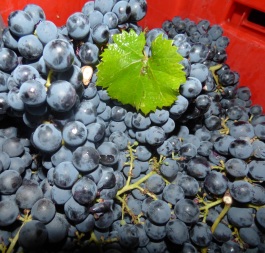 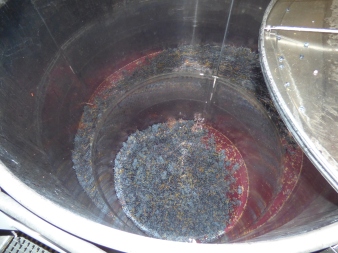 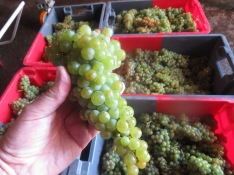 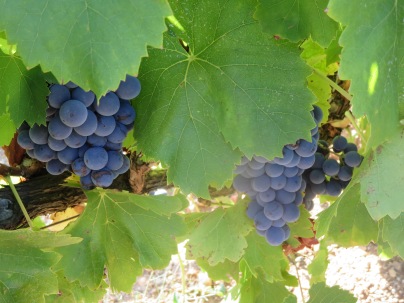 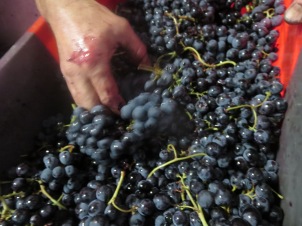 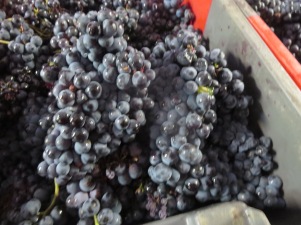