Back in the Coutelou vineyards. As I drive into them there’s a sense of never being away but also of anticipation – what’s new? That may sound strange as the vineyards don’t change too much year to year, yet every vintage is different. In 2018 the vines were already suffering from the widespread mildew following a wet Spring. This year the weather has been very different. A dry Winter and Spring  with cool, sunny weather has benefited the vines. They look as healthy as I can remember in the years I have been here.

New plantings and grafts mean that there is always change in the vineyards, this year it has been mostly a case of replacing vines which had failed, some Cinsault, Clairette and Macabeu amongst others. It is time to let the rare and old grape variety plantations of 2018 mature and establish themselves. 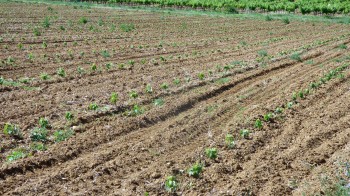 However, one new plantation of note. A small parcel next to Sainte Suzanne has been too wet to work in for the last 2 years, it is now planted with Macabeu and Clairette so more white wine will be produced in future. 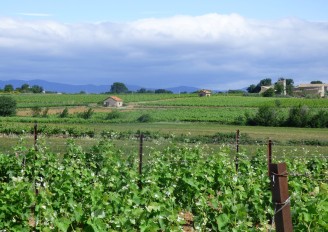 New vine; the plantation can be seen as the brownish patch on the left of the 2nd photo from La Garrigue’s Syrah vines

The dry year has also meant that Jeff has been able to lightly plough vineyards which have been too damp in recent years, Rome was given a light scratching for example. Nothing too serious that would upset the life in the soil, just enough to aerate. 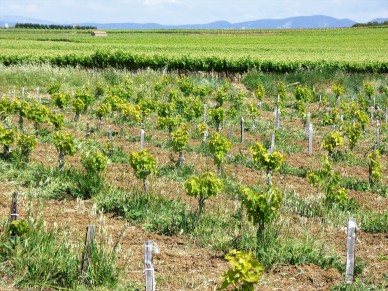 Flower Power, Julien and Christian attching the vines to stakes

They really do look well. Flower Power has been lightly worked too, to allow the young vines there to thrive without so much competition from the grass. If you look at the photos you will see the neighbouring vineyards belonging to others, planted much more densely. Those vines are flourishing with their irrigation and fertilisers, almost uniform, dark green with the nitrogen they are fed. The Flower Power vines are shorter and more delicate for sure, they are growing at a natural pace, finding their own maturity slowly. Here, and in all the other vineyards, flowering is almost complete, the bunches are set (débourrement). 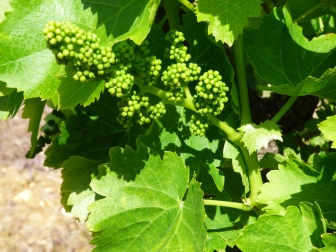 After last year’s much reduced harvest it would be good to have an abundant year, to restock the vats and barrels which have been emptied to make up shortfalls in wine and income. The signs are propitious, let us hope the northerly winds and sunshine continue to maintain the health of the vines and allow them to fulfil such a promising start. 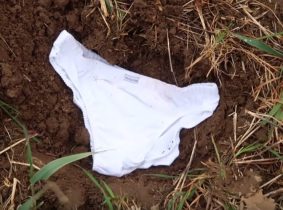 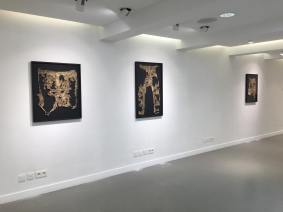 One curiosity over the winter. In late 2018 artist Anthony Duchene wanted to create a display to highlight the effect of healthy soils. In many of the natural vineyards of the region underwear was buried. At Jeff’s a pair of underpants was buried in Rome vineyard. This Spring they were dug up and reveal the activity taking place in the soils by animal and microbial life. An unusual but effective demonstration. Duchene’s work is on display in Liège at the Yoko Uhoda Gallery.

And, of course, regular readers frequently ask how Icare is getting along. Coincidentally it was his summer haircut on Tuesday so you can see that he has been well prepared for the warmer weather. He is a happy dog. 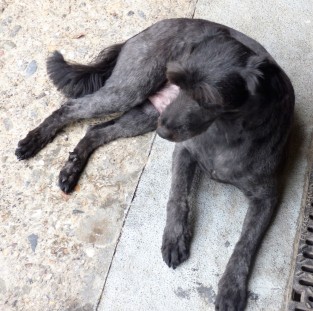 It was a beautiful, sunny day as I toured around on the 21st May. Rome was vibrant with colour from broom and flowers, roses lined the vineyards in Peilhan and Rec D’Oulette. It was good to be back. 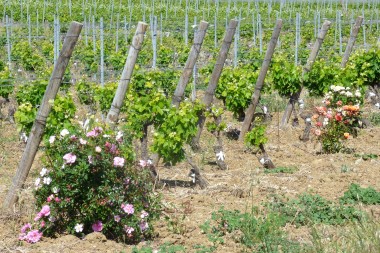 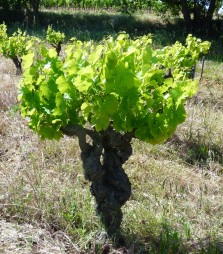