Sometimes we all need some support

Like many people I am prone to occasional bouts of depression and last weekend was one of those times. Fortunately it doesn’t hit me as hard as many people but it makes me (even more) difficult to live with. By Tuesday I was starting to feel better and toured the Coutelou vineyards. It proved to be a real tonic.

I started in Rome, where else? Surrounded by trees, birdsong, butterflies and even a hare who was far too speedy for my camera to catch. It is an inspiring place, so relaxing. The vines are hanging on to their leaves despite the long, dry spell, not always the case elsewhere. 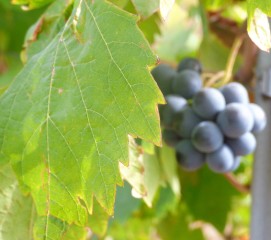 As I was to see in other vineyards the soils are starting to dry significantly. In Peilhan, for example, the clay soils were soaked all Spring and they compacted meaning that the recent dry months have caused that upper crust to crack. Some rain is needed. It would also give the vines some relief. They have had a very tough time in the last couple of years. 2017 saw drought which stressed them then this year’s wet Spring and mildew have made them struggle too. One of the reasons for picking some grapes a little early was to give the vines a break so that they can look after themselves. Rain would help that to happen.

In Flower Power (Font D’Oulette) the vines are much younger and the foliage more meagre. Compare these vines to those in a neighbouring vineyard. The watering and feeding of nitrates etc means that those vines are much greener and fuller with few signs of changing colour. The yields from such vines are much higher too. These are the issues which organic/biodynamic/natural producers face, they often have to accept lower yields and production in order to stick with their principles, and it explains the price premium.

Flower Power vines shining in the sunshine, the vivid green of neighbouring vines

Mildew meant that Jeff was reluctant to plough his vineyards this year as that would release the spores from the soil. Now that autumn is here, however, they will be turned over to add compost to the earth from all the plant growth. The mildew spores won’t flourish in the cooler conditions. Jeff and Julien were using pickaxe and mattock to clear the ground around the new planting in Segrairals on Tuesday. Weeks of work remain to be done. Meanwhile back in the cellar more cleaning, the sorting table and other harvest equipment taken apart to ensure everything is spotless. 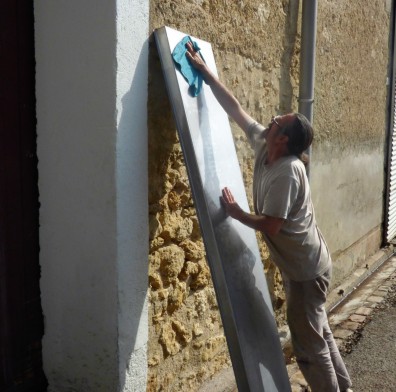 It was Louis’ last full day and he had kindly invited me to share a bottle of Mas Jullien over lunch. Jeff decided to make it a celebratory feast and we shared excellent food from the barbecue and a cake! A magnum of Macon from Valette was excellent and the 2012 La Vigne Haute magnum at least its match. We even went to taste my 2015 wine from barrel, soon to be in bottle! 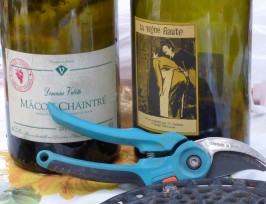 A day to lift my spirits. Natural beauty, tranquillity and the company of wonderful friends. I am a fortunate man.

2 thoughts on “With A Little Help From My Friends”