After eight months away from Puimisson and the Coutelou vines it was definitely a case of being very happy to return. As I stood in Rome vineyard there was the chorus of birdsong, hum of insects, flash of colour from butterflies and flowers. A resounding reminder of why this is one of my favourite places on Earth, capable of making me joyful just by being there. 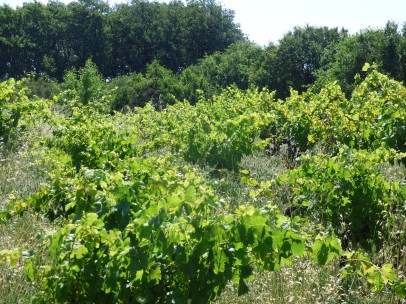 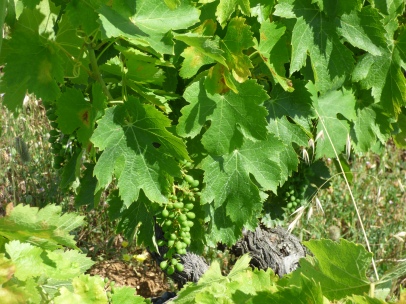 In Font D’Oulette (Flower Power), the vines are maturing well, many now sturdy and thriving in their gobelet freedom. The change from when we grafted some of them just two years ago is dramatic, perhaps more to me as I haven’t seen them since last October.

In Peilhan and Rec D’Oulette (Flambadou’s Carignan) the roses were still just in bloom at the end of the rows but starting to wilt under the hot sun. 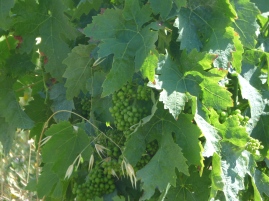 And there lies the rub. The hot sun has really only been out in the region for the last week, it has been a catastrophic Spring. Rain has fallen dramatically, almost three times the usual level from March onwards after a wetter winter than usual. The annual rainfall average has been surpassed just halfway through the year. Moreover the rain was not in sudden bursts but steady, regular, in most afternoons. Vineyards all over the region are sodden, tractors and machines unable to fight their way through the mud making vineyard work difficult if not impossible. Even after a week of sun if I press down onto the soil I can feel the dampness on the topsoil.

Mix damp and warmth around plants and there is a sadly inevitable result, mildew.

Look again at the photo of Peilhan, zoom in on the wines at the bottom,

there are the tell tale brown spots.

This downy mildew lives as spores in the soil and the rain splashes them up onto the vines. Jeff had warned me of the damage which I described from afar in my last post. Seeing the tell tale signs of brown spots on the upper leaves on such a scale across vineyards all over the Languedoc is another matter though. All those vines touched will yield nothing (though some will still put them into production, so be confident of your producer). I have heard that some producers have effectively lost most of their vines for this year and similar stories from right across the region. Grenache seems particularly susceptible to mildew and it has been devastated at Jeff’s, the Maccabeu too. 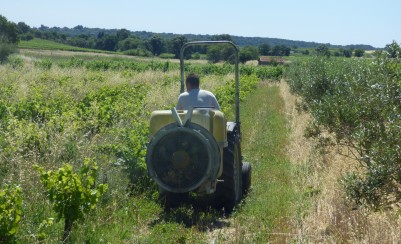 Meanwhile Jeff has been struggling against nature, not a normal situation. He has sprayed all kinds of organic products from seaweed, nettles, essential oils such as orange and lavender, horsetail, clay. He has used the two natural elements permitted under organic rules, copper and sulphur. Jeff is particularly reluctant to use copper but such is the battle this year that it was necessary. Unfortunately like Sisyphus the task is uphill. He sprays, it rains and the effects of the spray are greatly lessened by washing it off the vines, so he has to start again. At least this week that is no longer the case and Jeff has been working all hours to save what he can, to roll that rock uphill once more. He is discouraged, even heartbroken to see the state of some of the vines he tends and cares for so much.

Dare I mention that now is the time when oidium, powdery mildew makes itself known? Please, not this year.

So, production will be down enormously this year, we hold out best hope for Syrah, Mourvèdre, Carignan Noir. Lower production means lower income too, so expect price rises and please do not complain as now you are aware of the reasons.

So happy returns? Well on a personal level yes. To see my great friend again, to have Icare waiting to be tickled, to see the good side of nature. But. This is not a happy time for vignerons across this region and it hurts to see my friends knocked about like this. Let us hope for northerly, drying winds, sunshine and no more disease so that something can be rescued this year, for Sisyphus to reach his summit.

It really is Flower Power now. Jeff sowed wildflowers and plants to help the soils of that vineyard retain moisture, ironic given the Spring.