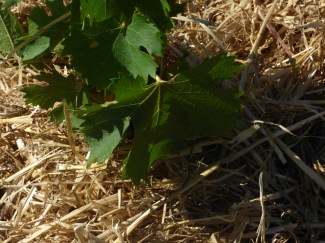 Young vines freshly grafted in March (see above) surrounded by straw? What is going on? The weather was so hot and dry over  a prolonged period that the vines were stressed. As these young vines would not be producing any grapes they could be watered to protect them, the straw keeps the moisture in the soil. 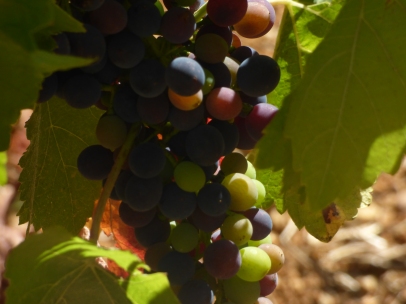 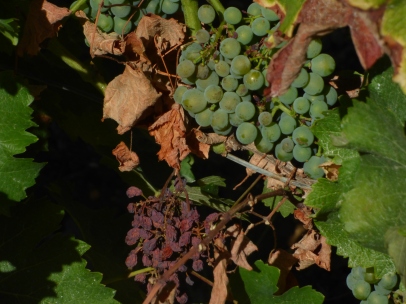 The grapes continued to grow though and July saw véraison, the colouring of the red grapes. They were smaller than most years but healthy in the main. Other than those vines affected by the widespread mildew of the spring and early summer, those grapes were dried and shrivelled by the disease.

More grape ripening, Carignan to the left, Grenache to the right. There were some beautiful bunches despite the weather problems of the year. Time to start thinking about harvest and that work began in the cellar itself where Jeff had taken out some very large fibre tanks and replaced them with smaller stainless steel tanks with a new steel staircase to take us above the tanks to place in the grapes and to carry out pigeage or remontage during the vendanges. And on the 24th Jeff was testing the grapes to check for ripeness and acidity to see if they were ready for harvest to begin (they weren’t quite!).

As dawn rose over Rome vineyard probably the most important month of the year began.

Vendanges means hard work, fun, pressure, grapes and cleaning amongst other things. Selecting the best fruit from the vines’ year of growth, making the best of that fruit in the cellar to make a natural process work by using care, patience and analysis. 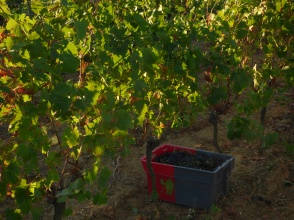 For each of the three harvests in which I have now taken part at Mas Coutelou my main memory is of the people, the teams who work to support Jeff. Friends all, and so many happy memories. 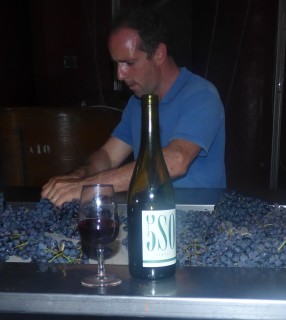 Cellar work continues as this year’s wines ferment and start their journey to bottle. Meanwhile time to prepare bottles of more of the 2015s, this time magnums. And in both photos Julien to the left and Michel to the right. The two figures who have been most present in Puimisson working at Mas Coutelou through the year. Two of the best, kindest people you would ever meet. Is it a coincidence that good people congregate together and that the best wines come from the best people?

Meanwhile autumn arrives in the vines, Puimisson in the background.

Cases of wine leave Puimisson to head around the world. Mas Coutelou is sold in Australia, Japan, the USA, all over Europe and at the cellar door. As the end of year and Christmas holidays approach merchants want their wines and exporting the cases involves planning, spreadsheets and collation of the various cases.

Meanwhile, in one corner of North East England one happy vineyard worker sorts his own collection of Coutelou treasures. 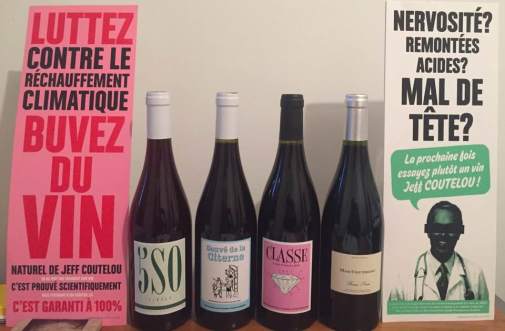 A photo from Camille Rivière who imports Jeff’s wines into the USA, those cases above have arrived safely and Camille shares her happiness with the bottles she has opened and enjoyed.

Jeff tells me that there has been a lot of rain in recent weeks, 400mm last month. That is certainly welcome but the weather has also been very mild. Reports of mimosa blossoming (it should happen in February) and Jeff told me he had seen a neighbour’s vines preparing to bud!! Frost is needed for the vines to enter a dormant stage and rest, recover after  a difficult year. More mild weather would mean two years of non-stop activity, which would weaken the vines.

A fantastic year, a memorable year, a complex year in the vines.  But also a year marked with sadness at the passing of Jean-Claude Coutelou. I raise my glass once more in his memory.

2 thoughts on “A year in the vines, Mas Coutelou in photos (Part 2)”