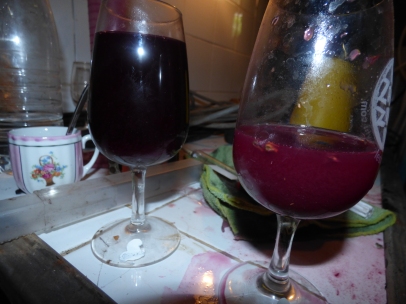 Today – Grenache and Syrah has matured

When I mention vendanges to most people they think of grape picking and, maybe, putting the grapes into a tank (cuve). However, vendanges means much more than that and we are now entering stage two of the process. 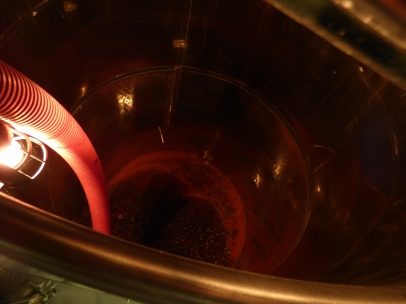 When the grapes have been picked and sorted they are stored in a cuve where the juice interacts with the skins extracting flavour, colour and also coming into contact with the yeasts which grow naturally on the skins. These yeasts then begin the process of fermentation which turns the sugars in the juice into an alcoholic wine. This mix of juice, skins, pips and flesh is known as must.

So, whilst picking continues at Mas Coutelou Jeff must already plan what is happening to those cuves of grapes which were picked a few days ago, You will remember from #1 that we picked Grenache and Syrah on days 1 and 2 and that they were in cuves 2A and 2B. They are picking up colour and the fermentation means that the sweet grape juice of last Wednesday is already very different. Still plenty of raspberry and red fruit flavours but the sugar levels have fallen and the liquid is now more austere, a little acidic and with a weight of alcohol. It has turned from child into young adult.

Today – Grenache and Syrah has matured

To ensure that the grape skins do not give unpleasant flavours, volatility etc., Jeff must ensure they do not dry out as they float on the juice, forming what is known as the cap (chapeau). Therefore, wine is pumped from the bottom of the cuve over the top of the chapeau to push it down a little and to moisten it. This is known as remontage. 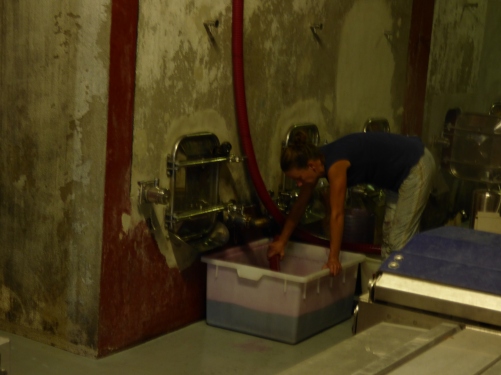 Carole carries out a remontage

Alternatively, an instrument or hand can be used to push the chapeau down into the juice, a process called pigeage.

When Jeff is satisfied that the juice is ready and has had optimal skin contact he will begin pressing the must to leave the final juice. We await the first press as yet but it will be in the next couple of days as the Grenache and Syrah are already showing their adolescence. 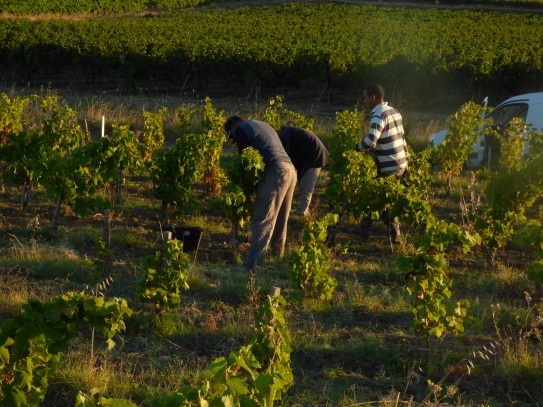 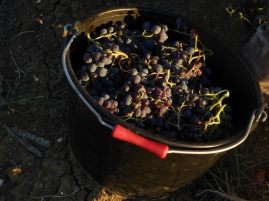 Meanwhile picking continues. Friday saw Sauvignon Blanc and Muscat À Petits Grains as the first white grapes of 2016 at the domaine. Monday saw the picking of the Merlot from Colombié which will, unusually, find its place in the Coutelou cuvées. I am no great fan of Merlot but the grapes were lovely and the juice tastes especially rich and full.

Today (Tuesday) was Flower Power day, sadly the snails won the battle this year. They ate so many of the buds in Spring that the vines struggled to produce much. The dryness merely confirmed Font D’Oulette would be low yielding in 2016. Around twenty cases is not much return for such a lovely parcel of vines. High quality grapes from the various cépages but very low quantity. 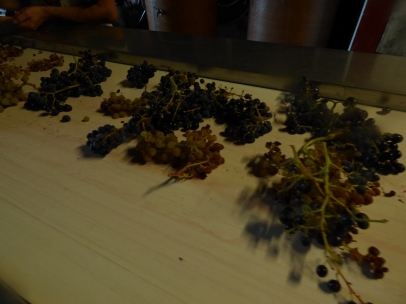 Clairette and Oeillade from Peilhan with some Grenache Gris and Muscat Noir was added to the mix. Also picked was the Cinsault from Rome which was in good condition with nice big berries. So my two favourite vineyards are already harvested. 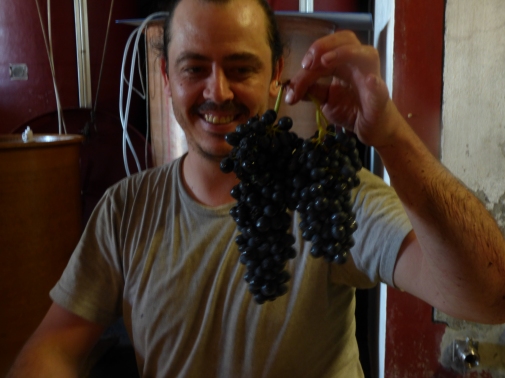 Finally, some lovely Syrah from Segrairals was picked and there will be much more of this tomorrow. This Syrah is such good quality that Jeff is already excited about what he can do with it. Segrairals is the biggest vineyard of the domaine and is also serving up some of its best fruit.

A new sorting table was brought into play this week and it is certainly much more efficient than the previous method of sorting from the cases themselves. Triage of better quality but also much speedier too. The table is already paying for itself.

So, stage 1 (picking) is well under way, stage 2 (the must in cuve) is under way for some and stage 3 (pressing) will shortly begin. The jigsaw is already becoming more complicated for Jeff Coutelou.

There really is a puzzle under there