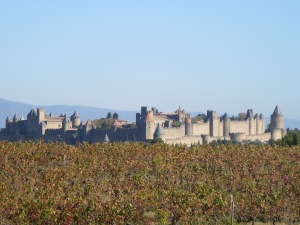 When you live in the Languedoc you are surrounded by vines. They are everywhere and form the world’s biggest vineyard area, producing one third of all France’s wine. Vines stretch over hill and valley, coastline and plains. As you walk around it is easy to think of vines as all being the same, part of one big plantation, but when we have received visitors and we go on walks through the vineyards they often ask me what sort of vine we are passing. Cue guesswork on my part unless I am in the vineyards of Mas Coutelou. To remedy this ignorance and to meet the brief at the top of this blog that I should be “learning about wine, vines and vignerons” I set myself the challenge of being able to identify the main types of vine in the region.

Ampelography is the study of identifying and classifying grapevines. There are many learned books on the subject, some running to hundreds of pages. However, I wanted a simple guide, to learn the basic varieties before expanding to others. I took some photographs in the parcels of vines of Mas Coutelou and using the internet and Jeff himself I hope I have put together a simple reference piece. As we enter harvest it has proved useful to me so that I know what I am picking or sorting. Hopefully it will be useful to you too, whether you visit vineyards or just take an interest in wine and vines.

The colour of leaves varies but so too the number of lobes (from just one to seven), the colour of the veins and the shape of the sinus around the stalk (pétiole). The sinus is the gap between the lobes. So here is my simple guide to identifying some Languedoc vines. I have started in this post with the five main red wine varieties.

Syrah is one of the great varieties of the Languedoc. Famous for its wines in the Rhone Valley and around the world (Shiraz in Australia) Syrah produces great wines here too. The leaves are quite a light green in colour with 5 lobes which are well separated out including a big sinus (V shaped) around the stalk (pétiole). The veins are quite light and stand out. The leaf edge has small, gentle teeth shapes. The grapes tend to be oblong shaped and fairly small in size. Syrah is one of the earlier red varieties to ripen. 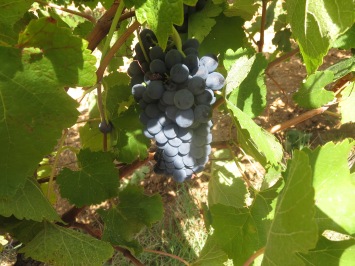 A variety which loves the heat, very much a Spanish and Mediterranean grape. Grenache leaves have a more round appearance than Syrah with big, wide lobes which are not so separated as the Syrah giving the impression of a big, whole leaf. There is a wide sinus around the stalk. The leaf edges have saw teeth which are quite marked. Light veins and round, medium sized grapes. Grenache is a late ripening variety. Often used to blend it is not often used for single variety wines.

Others – Engelvin, Même-Si and Vieux Ronsard;       Treloar, One Block Grenache; 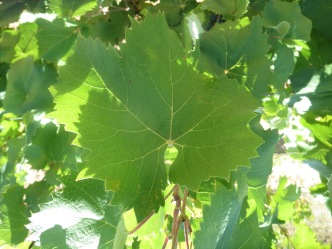 Mourvèdre is a late ripening and, sometimes, a difficult grape to ripen. The lobes are broad and form three rather than five as you can see in the photo on the right of the page above.  There is a little green colouring in the veins and the sinus around the stalk is a lyre shape. The teeth around the edge are distinct and quite big all around. The grapes come in biggish bunches though the grapes are medium in size. 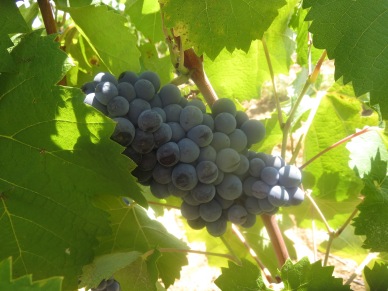 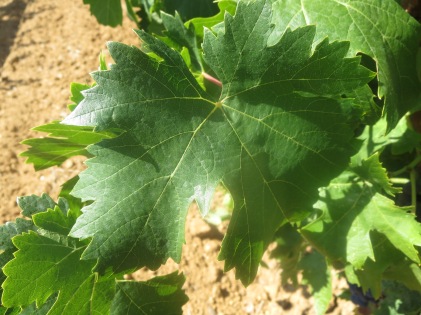 Carignan has big leaves which are quite hairy underneath and have a more dimply appearance than most in the upper surface. Five lobes usually though in the photo above the lower lobes are small with big upper lobes and a distinct top lobe. The teeth are tapered and distinct. The veins are hardly coloured. This is a late ripening variety and you can see the grapes below which are still turning black, even though this was taken at the same time as the other photos. The grapes and clusters are medium to large in size. 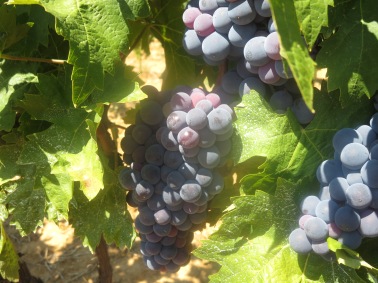 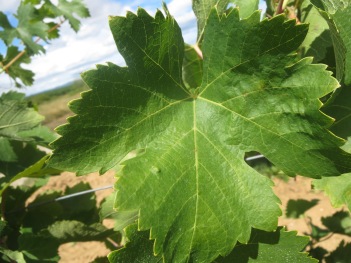 I like to think of Cinsault leaves as being very like the grape’s flavours, open, friendly and welcoming. These are big widely spaced lobes and a deep, open sinus around the stalk. The veins are light and clear and the teeth are big, almost rounded which cover all the leaf edge. Often used in rosé wines Cinsault is starting to be used to make some great red wines in the region.

Mas Coutelou – 5SO and Copains

6 thoughts on “Turning over a new leaf”