The weather in the Languedoc has been a talking point, apparently it is not just a topic for us British people. No rain since June 12th, very high temperatures, 39C one day last week. Fires in the garrigue, vineyards and even towns, including our neighbouring village of Roujan. The result of this has been fissures in the ground, e.g. the photograph below in one of Jeff’s vineyards.

This crack in the soil is over 30cm deep, a sign of the drought conditions

Some of the vignerons in the area have been irrigating their vines and a sign of this has been evident too. If you look at the photos below you will see white traces in the soil. This is calcium carbonate which is a product of the water imported to irrigate the vines. In other words the irrigation is changing the nature of the soil itself. 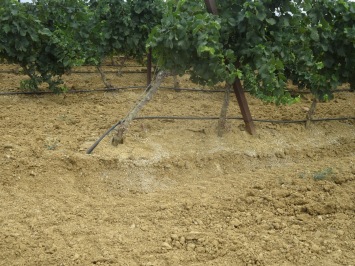 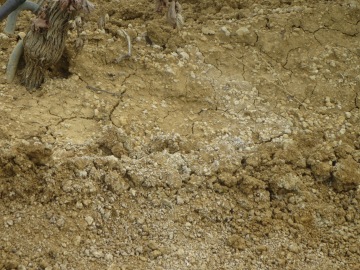 The vines themselves are remarkably resistant and strong even in the face of the lack of water. This summer is nothing unusual for the Languedoc but it builds on a fairly dry year in 2014 too. The leaves of the vines are curling in on themselves, a sign of some stress.

Other problems are showing too. Esca is a virulent wood disease which is a major threat to the vineyards of France, working like a cancer inside the wood. It suddenly emerges and affects the leaves and causes the grapes to shrivel and drop off. 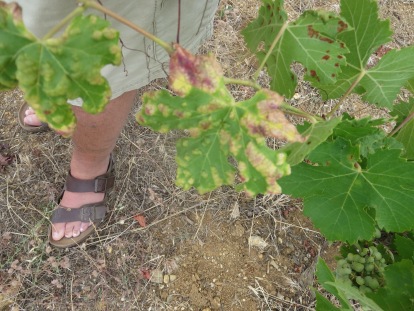 Esca showing on vine leaves in the Languedoc, July 21st

Some have linked its spread with rainy springs and higher summer temperatures, such as 2015. There is no cure, it was formerly treated with arsenic but that has, understandably, been banned. It is thought that 10 – 20% of French vines may be infected by the fungus, they have to be replaced and, of course, they take time to grow and don’t produce the same quality as older vines would have produced. 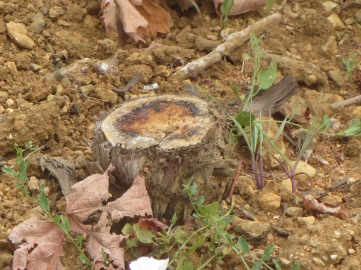 Vine stock showing the signs of esca after being cut

One perennial problem is vers de la grappe. These are the larvae of butterflies and they grow in coccoons amongst the grape bunches, leaving a white filament as proof of their residence. They pierce the skins of some grapes causing them to be ruined.

Bats and other predators eat these pests which is why Jeff, amongst others, encourages bats to live near his vines by putting up bat houses and encouraging the growth of plants, trees etc around and amongst their vineyards.

The main concern is that the lack of water will reduce yields, rain would help to swell the grapes and produce more wine. Some rain was forecast on July 22nd but in Puimisson and many other areas, none arrived.

Not all bad news however. The vines are resistant and the careful management of soils, unlike the irrigated vines above, means that their roots go deep into the soil searching for water. Struggling vines produce the most interesting wines. Let us hope that this is the case in 2015.

Diversity amongst the vines at Mas Coutelou continues, less than 10 metres from the fissure in the ground above were these partridge eggs which had hatched recently.

And in the cellars work has begun to replace the leaky roof, which is built on timbers hundreds of years in age. It is a beautiful roof and happily the timbers have been saved, most tiles will be recycled. I will write more about the changes in the cellar as preparations for the vendange begin.

And finally véraison is in full swing. The change of colour of the red grapes is one of the key events in their development as they approach maturity. This marks the change in growth of the berries, they are now producing sugars within the grape rather than concentrating on simply growing and producing acidity. It is certainly one of the most noticeable and landmark changes in the grapes.

Note the curling leaves, the vines are feeling the lack of water.

Véraison and the increase in sugar levels also attracts more animals to eat them, birds, insects etc. Problems, problems everywhere. Who would be a vigneron?

Two creatures love being in the vines for sure, me to watch their growth and, more importantly, Icare who loves to be in amongst the dirt and, in this heat, he loves the shade of the vines.

2 thoughts on “Véraison, drought and other issues”