Air pressure was high, the moon waning, wind from the north – a good time to bottle wine. Yes these things do make a difference. The week of March 9th -12th saw around 10,000 bottles filled with wine and thousands labelled ready for a large wine tasting. Bottling is a tense time for the winemaker, risks abound. Contamination and exposure to oxygen are the main two risks; it is estimated that the wine interacts with more oxygen during the bottling process than in years inside the bottle whatever the closure. Most winemakers will add sulphur dioxide at this stage in order to protect the wine from bacteria and oxydation, including many who would regard themselves as makers of natural wine.

Jeff Coutelou adds no SO2 at any stage of the winemaking process and therefore takes risks. He has to be confident in the health of his wine and everything has to be as clean as possible to minimise those risks. 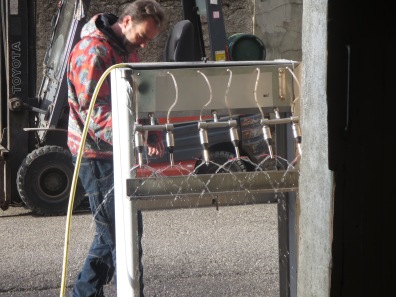 Cleaning the machinery before the process starts

As it happened the stress began before the bottling, the main machine had a part not working and the engineer was late in getting the part. Therefore, day 1 would need to use an older machine to bottle magnums of 5SO, the simpler of the Cinsault cuvées. 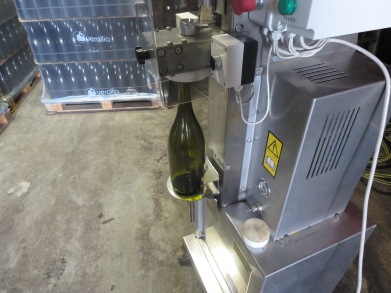 The magnum is corked

Bottling magnums is a much slower process than single bottles because of the older machine and a separate machine for corking. A few hundred can be produced in an hour rather than the 1200 single bottles. The costs are therefore greater even if the bottle retail price will not reflect that. 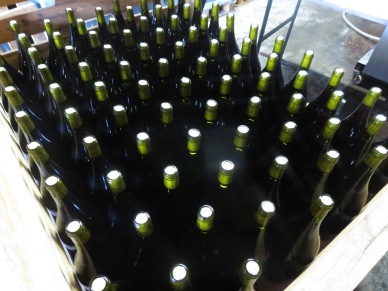 Also produced were bag in box wines (BiBs) which are usually sold to restaurants. This was mostly Merlot wine (from the Le Colombié vineyard).

Filling the bag with Merlot

The next day the new part was fitted and the main bottling line was in action. This is an expensive machine but can bottle 1200 bottles an hour whilst controlling the risks of contamination and exposure to oxygen. Carole can be seen here placing the bottles on the machine. It then carries the bottles through the process at the required speed.

Inside the main body of the machine the bottle has its air sucked out to prevent any staleness. The bottle passes to the reservoir of wine and is filled. It moves on to a sensor to ensure that the level is correct inside the bottle, and removes or adds wine as necessary.It is important that there is a small gap between wine and cork to allow air inside so that the wine can breathe and develop before consumption. The cork is then driven into the bottle which begins a 3 minute journey around a conveyor belt allowing the cork to expand in the bottle neck so that is properly closed. They do rather resemble penguins waddling or a long queue in the Post Office.

This extra video shows the sensor and corking in closer detail.

Finally the bottles are stored in large pallets and the sunlight created some stunning colours.

As for the wines, well the PM rosé is fruity, refreshing and yet has plenty of texture and length of flavour. However, the 5SO was my star, it is a lighter Cinsault ready for drinking. Immediately after bottling it had a slightly cloudy appearance which began to settle by day two. I opened a bottle on the fifth day and it was delicious, with real depth. Much more than a simple wine. Enjoy!