I have often said that Pic Saint Loup is one of my favourite wine growing areas, and that I have rarely had a disappointing wine from there. Domaines such as Mas Bruguiere, Hortus and Foulaquier are some of my personal favourites. It is also a beautiful area to visit with stunning scenery. 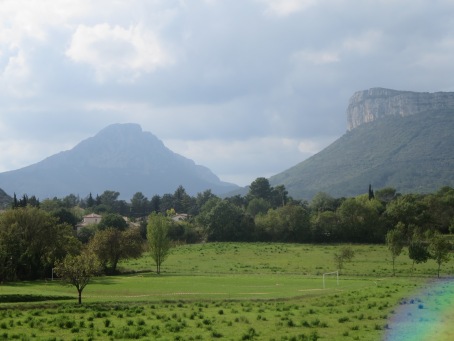 I was delighted to see, therefore, that the village of Valflaunès was holding its Festa De La Vendemia. It was a great opportunity to go along and try out more PSL domaines.

What we found when we got there was so much more than a wine festival though. There were lots of great food stalls selling everything from cheese, honey and bread to chestnut tapenade and vegetable pakoras. This made it easy for people to put together picnics or choose from local cafés or the village restaurant.

There were some really well put together exhibitions on a range of subjects such as how the region was involved in World War 1, 19thC local dress, what a vigneron’s cave would have looked like in 1930, local wildlife and so on. Street musicians, folklore dancing, choirs and other street animations meant that the whole village was full of life and activity and it seemed like everyone who lives there was involved in the events. Top class organisation, a real model of how a village can show itself at its best. 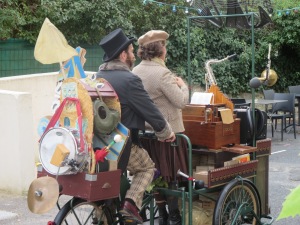 Of course, wine was our principal reason for being there and there were plenty of domaines represented. I could not get round them all especially in the afternoon when the crowds around the stalls became larger. These are some impressions from the tastings I did.

White wines were rather disappointing to be honest. They were not ideal conditions for serving white wine of course, temperatures in the low to mid 20s and wines standing on stalls for a while. However, many white wines seemed a little flabby and almost sweet. Roussanne and Marsanne (the main grapes used in the area) would be expected to produce drier, fresher wines than most of those I found here. The exception was Chateau Lancyre’s La Rouvière 2012 which did offer the elusive freshness I personally want in white wine. Otherwise, the best two whites I tasted included a Sauvignon Blanc, not something I expected, and a Chardonnay/Viognier/Roussanne blend from Hortus.  I honestly was not tempted to buy any white wine that I tasted. At around 10€ I expected better. Perhaps the conditions were to blame but …

Red wines were much better though there were few outstanding wines. All wines were variations of Syrah and Grenache  usually blended with other varieties such as Mourvedre and Carignan. Hortus and Bruguiere showed their entry level wines and neither really shone. My preferred wines were Domaine Mortiès’ classic Pic St Loup 2012 and Chateau de Moucheres’ Tradition 2012 both wines I would happily buy, again priced around 10€. Hats off to Domaine Zumabum Tomasi for showing a 2006 wine, it is rare to be offered older vintages and this wine showed how well PSL can age. I was less impressed by one producer who ignored visitors, not just me!, so that she could chat with a friend, I shan’t give a name but I wouldn’t go back. There were a number of quite thin wines from other domaines too, so I now know that Pic St Loup, like every area, has its good and weaker producers.

Top of the class was an easy choice. Domaine Saint Daumary is in the village of Valflaunès itself and was recommended to me by one of the Rugbymen. Thank you for the recommendation Romain, you were right. Julien Chapel is a young producer and I thought the two reds he offered for tasting were both delicious; full, satisfying wines with the silkiness I associate with my favourite Pic St Loup wines. I was especially taken by the Syrah dominant wine Troisième Mi-Temps. I returned to buy some of the wine but Julien was surrounded by large numbers of people wanting to taste his wine. I shall definitely make a return journey to buy.

Overall, a really enjoyable day out. The wine kept me happy but there was so  much going on that children, families and non wine drinkers would be entertained. Well done to Valflaunès and thank you.