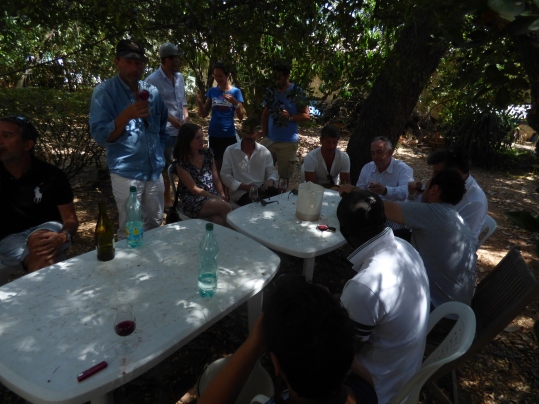 Thursday, August 11th was the last day before Jeff shut up shop for a few days as he does every year to celebrate the Béziers Féria. A few days of rest and recuperation before the preparations really start for the vendanges. As he had received a number of requests for visits Jeff decided to group them all together and have a tour of the vines and tasting with lunch.

Visitors from Grenoble, Orléans and Nanterre assembled at the cave along with my friend and sommelier Sandra Martinez and we set off around some of the vineyards. Jeff explained his philosophy and vineyard work and it’s worth repeating a couple of points of note. I mentioned the problem of vers de la grappe a few weeks ago which Jeff treated with a spraying of clay to discourage the moth from laying its eggs. We found a bunch in La Garrigue which was affected and Jeff opened it up to reveal the cocoon of the larvae.

He also explained how bats are the ideal solution and why he provides shelters, each bat would eat around 2,000 insects a day including the moths responsible for vers de la grappe. 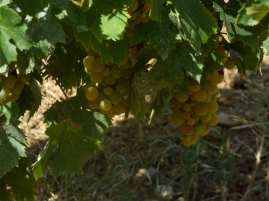 We also looked around at the majority of vineyards and their dark green colour at a time when the vine is putting its resources into the grapes to get them to maturity, as that is how they reproduce. So, in a natural state the leaves start to look pale and tired as the vine is not channelling energy into the leaves. The dark green, attractive vines are so coloured because of the nitrogen feeds and, in some cases, irrigation.

We returned to the domaine where we were joined by a group of wine professionals. In the garden we tasted a range of Mas Coutelou wines as well as some lovely salads and (for the carnivores) some charcuterie. 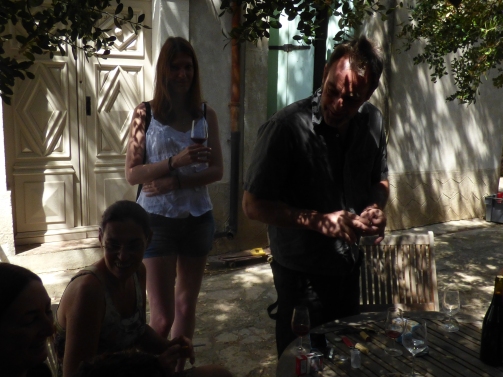 Jeff leads the tasting accompanied by his sister and niece

I missed the Bibonades and Peilhan as I was getting the Maccabeu from tank. I had a bottle of Peilhan at home recently though and it was lovely, really strong evidence of the quality of 2015. All apples and pears and fresh acidity with a long finish. Even by Coutelou standards it is an exceptional wine.

The Maccabeu is, if anything, even better. Cooked apple and cinnamon flavours, fresh acidity, almost smoky. There is so much going on here and, as the jug I collected the wine in was in front of me, I kept being drawn back to it through lunch. The wine changed and opened out with more fruit and spice. This will develop beautifully when it is bottled, a stunner, my new favourite.

OW1 is Jeff’s first skin contact wine. He was reluctant to join the trend and didn’t want an orange wine but this spent plenty of time on skins, I remember Cameron and I carrying out a manual pigeage. Now bottled the wine has texture and tannins from that skin contact but there is plenty of fruit and remains balanced and fresh. Very good. 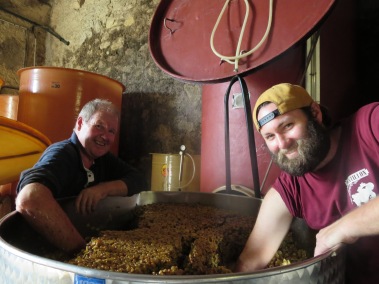 5SO was on good form. The boisterous, chatty group became quiet for the first time, captured by its fruit profile and drinkability on a hot summer’s day, which essentially is what it was designed to do. 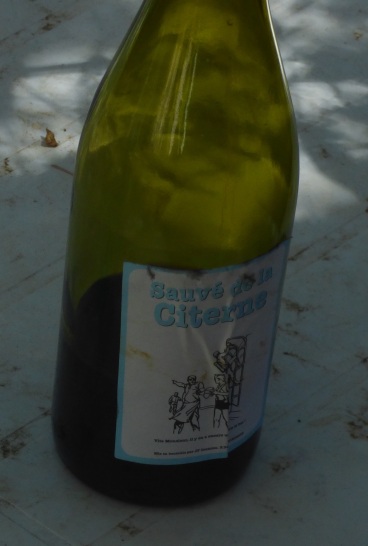 Citerne was one I didn’t have last week and it had been some time since I had tasted it. It showed well, the Mourvedre adding a real plummy depth. Another wine which will emerge in coming months, another to look forward to. OPPVDQ was on great form, another to quieten the crowd. It confirmed my opinion that this is a wine which will really benefit from some time in bottle, hang on to some if you have them. La Buvette À Paulette was last week’s big surprise and another bottle confirmed the pleasure, really showing its quality.

Flower Power not yet properly labelled. What a colour!

Flower Power took some time to come around but now that it has done so I can confirm that this will strengthen the reputation which it earned in its first vintage in 2014. The vineyard is still young and will continue to improve the wine it delivers, if the snails leave it alone. The ten grape varieties give a complex story of light and shade, red and dark fruits, floral and sappy.

Flambadou was once again a star, showing the lightness of touch in this Carignan. Jeff describes it as like a Pinot Noir. There is depth and character packed into quite a light structure. The vineyard has a light layer of limestone beneath the fine clay and it is this limestone which adds the complexity to the wine. A grand cru of Carignan.

L’Oublié and its story once again captured the imagination of everyone, its secondary flavours beguiling the tastebuds. Devigne Qui Vient Diner is the wine which Jeff made in partnership with Christian Venier from the Loire, Gamay added to some Languedoc grapes such as Cinsault. My, this has improved with a few months in bottle (magnum), really delivering a rounder more harmonious blend with zappy fruit and lovely sweet fruit.

Finally 5J the Grenache Gris from 2012 aged in barrel made to reflect a Spanish fino to accompany the best hams. Oxidised notes, barrique notes and a flash of clean fruit, quince and apple.

A great day, much longer than most were expecting but nobody showed any signs of fatigue or willingness to depart. Many joined us in the cave des soleras to taste some of the old wines there. And poignantly, some wine of Jean-Claude on what would have been his 80th birthday. His legacy will live on.

I enjoyed reading the Facebook post of one of the visitors Benoit who described Jeff as a magician and an artist. The day was a success.